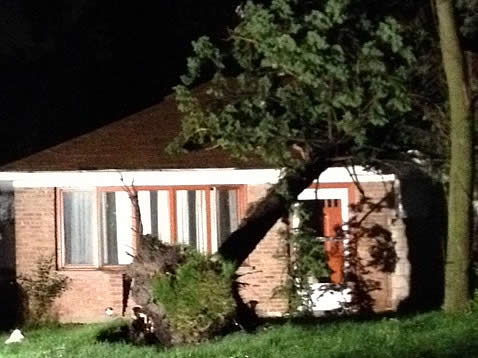 A tree leans against a home in the first block of Sauk Trail Monday night. (Photo: VOPF)

Park Forest, IL-(ENEWSPF)- Park Foresters are recovering from a fierce thunderstorm with at least two rounds of microbursts that struck Monday evening, rivaling damage caused by the tornado in 2012.

According to village officials, over the last 24 hours over 5,400 properties were without power. Impacted homes were south of Sauk Trail along Indianwood Boulevard and South Orchard Drive into Will County, across Monee Road.

Currently, about 4,000 homes remain without power acros the village. Officials estimate power restoration ranges from the next few hours, and, in some cases, power may only be restored through the weekend.

Reporters from WGN and NBC 5 Chicago were on the scene as well. As of 10:15 p.m., officials report that approximately 500 homes had power restored.

As crews were winding down work from the 7:30 p.m. microbursts, a second huge round of microbursts rocked the north end of the Village, according to officials. Vegetation damage appeared much worse with the second wave of microbursts.

Village Manager Tom Mick told ENEWSPF he observed extensive tree damage on just about every street in the East and West Lincolnwood neighborhoods, as well on the “W” streets.

Staff members discussed storm clean-up Tuesday morning. Members of the Department of Public Works or contractors will chip and/or haul away any tree debris that residents place curb side through the end of the week.

Amazingly, it does not appear that there were any storm-related injuries in Park Forest.