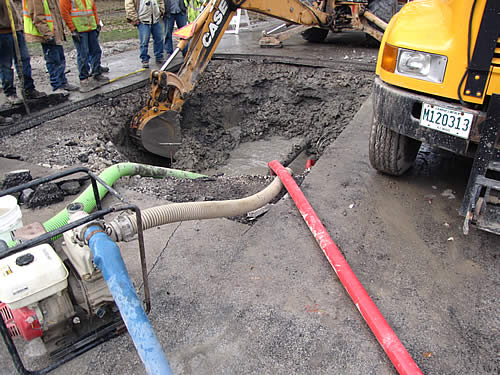 Park Forest, IL-(ENEWSPF)-UPDATE: October 30, 2014 – 2:23:57 PM CST – A precautionary boil order remains in effect in Park Forest as samples of water are being analyzed to determine safety.

The boil order has now been extended to ALL parts of Park Forest after crews today investigated reports of water issues in areas of town previously not impacted.

Though the chances of water being unsafe is slight – thus the boil order is precautionary – Park Forest has determined it is in the best interest of all residents to extend the precautionary boil order area to cover ALL parts of town.

Residents using water for drinking or cooking should allow the water to boil for at least 5 minutes.

The broken water main that caused this precautionary boil order was fixed at 2 a.m. and testing began at roughly 6 a.m. Test results take at least 24 hours.

Once analysis has been completed at noon tomorrow, the boil order will be lifted or extended.

The Village will continue to update residents on this situation.

This morning at 11:45 a.m. a 16-inch water main in the area of Park Street and Westwood Drive broke.

As a result of the break, water in the distribution system dropped to 12 per square inch (PSI).

In accordance with IEPA regulations and guidelines, the Village of Park Forest has issued a precautionary boil order for the neighborhoods of Eastgate as well as residential neighborhoods south of the Canadian National railroad line extending to Sauk Trail.

Residents in the impacted areas should boil water for at least FIVE minutes before using for personal consumption.

The boil order is in effect until further notice while crews work to repair the break and tests are completed to determine water quality.

The cause of the break is under investigation.

Director of Public Works Roderick Ysaguirre said he expects to be on site through the night with crews as they work to repair the main, which is a line that comes directly from the water plant and extends south to Indianwood Boulevard.

For questions, call 708-503-7702. For updates on this situation, visit www.villageofparkforest.com.