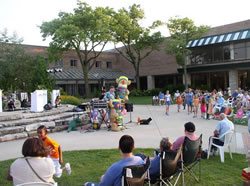 The former Marshall Field’s department store building, which has recently served as a backdrop for events on the Village Green, is closer to demolition. (Photo: Wendy Heise)

Park Forest, IL–(ENEWSPF)– The building that was once home to a Marshall Field’s department store is now closer to being demolished.

The Field’s building, located next door to Village Hall on Victory Drive, first opened its doors in 1955 and was one of the first suburban Field’s locations. The store was highly successful for over three decades before shoppers began to flock to indoor malls in the area, which threatened stand-alone stores like the Park Forest Marshall Field’s.

Following the 1995 closing, Park Forest Officials began to market the former Field’s building to perspective businesses in hopes of keeping the historic site a fixture of the Village’s downtown.

After nearly 15 years of unsuccessful attempts to find a new owner, plus an estimated $50,000 annual tab for upkeep of the building, Village Officials voted unanimously in October of 2007 to have the structure demolished.

Since the vote, Park Forest officials have sought grant funds to help reduce the Village’s costs for the tear down.

Last month, the Village received notice that $300,000 from the Cook County Community Development Block Grant (CDBG) program had been received. The award, coupled with a previous awards from CDBG, now bring the total aid towards the demolition project to just over $932,000.

The Village is considering implementing a geo-thermal technology that will heat and cool Village Hall, which currently shares a wall with the former Field’s building, once the structure is demolished.

Demolition work could begin as early as May 2010 and could cost close to $2 million dollars.

The recent grant award of $300,000 toward the Field’s demolition is one of several notifications the Village has received on grant funds in the past few months. According to Village officials, Park Forest also received a $500,000 grant from the EPA towards sewer line repairs and replacements, a $500,000 grant for Neighborhood Stabilization Program efforts from Cook County, and a $495,000 grant from the Federal Government Surface Transportation Government towards the resurfacing of Orchard Drive from Sauk Trail north to Lakewood Boulevard.