In the past few days, MSNBC has repeatedly used misleading graphics of the Dow Jones industrial average showing a decline since the beginning of November 2008, suggesting that the drop started with the election of President Obama. In fact, as Media Matters for America has documented, the Dow was on a downward trajectory months before the election, dropping 3,738 points from May 2, 2008, to November 3, 2008. 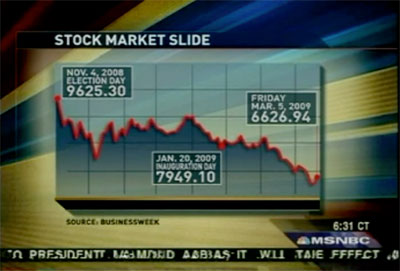 During the 7 a.m. ET hour of MSNBC Live, Witt stated to CNBC senior contributor Ron Insana: “On Election Day, the Dow was at 9,625 and change; January 20 — Inauguration Day — it was at 7,949. And yesterday the Dow is at 6,622, a drop of nearly 3,000 points just since Election Day. I mean, any explanation as to why Wall Street has not taken to everything that President Obama is trying to do?” During the 10 a.m. hour, Witt again showed the graphic to Washington Post staff writer Anne Kornblut, stating: “[W]e have a graphic showing about how Wall Street has been just staggering. So, how long do you think good intent and this relative honeymoon period will last if the numbers and the graphs keep continuing the way they look right now on our screen — downward?”

As Media Matters has documented, anchor Contessa Brewer also aired a cropped graphic of the Dow during the March 3 edition of MSNBC Live, labeled “Dow Since Election Day.”

In addition, on the March 6 edition of Morning Joe, host Joe Scarborough aired a similar graphic, labeled “Dow Since Election Day,” after stating: “[W]e’ve also been frustrated about the lack of clarity out of the Treasury Department. We’ve been showing graphics of the Dow Jones just collapsing since Barack Obama’s election.” 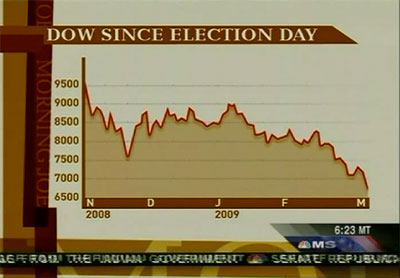 On the March 6 edition of Hardball, host Chris Matthews showed a “Dow Since Election Day” graphic while claiming the market doesn’t “like what they hear coming from Obama.”

Contrary to the suggestion that the Dow started to decline with the election of Obama, the Dow from October 2007 to the present shows a downward trajectory occurring before Election Day:

As Media Matters has noted, other media outlets, including Bloomberg News and FoxNews.com, have echoed this misleading claim, which also has been highlighted by Matt Drudge.

WITT: How about this new Newsweek poll; the numbers we’ve been getting — quite interesting. Fifty-eight percent of Americans approve of the job the president is doing; 72 percent have a favorable opinion of him. Do these high numbers surprise you, given the state of our economy?

KORNBLUT: It’s been interesting. The numbers have been consistent over the last few weeks that President Obama still has a lot of support from the public, even on the economy.

You’re talking about Iraq, but even on the handling of the economy –which, of course, has only gotten worse — there has been an expression of confidence in his actions. I think the White House would interpret those numbers to mean that even though things on the ground here haven’t turned around, even though we’re still, obviously, engaged in Iraq, the public sees him taking concrete steps to try and move things forward.

And all the rapid action we’ve seen over the last few — six weeks or so that he’s been president, is a demonstration of his intention to do things, even if it hasn’t actually happened yet.

WITT: Well, good point you make here. The intention is all there, but let’s look at — we have a graphic showing about how Wall Street has been just staggering. So, how long do you think good intent and this relative honeymoon period will last if the numbers and the graphs keep continuing the way they look right now on our screen — downward?

KORNBLUT: Well, it’s interesting. It’s almost a redefinition of the presidential honeymoon. Usually, we consider the honeymoon to be a period of good times — six months or so that the president gets. This honeymoon is really more sort of a grace period, that — you’re right, it seems to have gone on despite all of the bad news.

There have been, of course, a fair number of stories asking about his effect on the markets and whether at some point he can stop the bleeding or stop the drop of the Dow, which hasn’t happened yet. So, I would expect that those stories will continue. You know, if the Dow were to get down much, much lower, I think that the sort of grace period might end.

KORNBLUT: I think there is no way to separate it out. It’s a great question. I think that at this point, talk and action are all intertwined. I do know that the White House has been eager to get him out of Washington. That’s why we saw him travel to Ohio yesterday. That’s why we’ve seen him in North Carolina.

Starting pretty soon we’re going to see him traveling overseas. He’s going to follow in the footsteps of Clinton now and be traveling on March 31 on his first overseas trip. So, I think all of that activity is intended to both be the activity, but also to send the signal that he’s really trying to do something.

From the 7 a.m. ET hour of the March 7 edition of MSNBC Live:

WITT: Or is it a good morning, right?

INSANA: Well, it’s a bit of a hangover from yesterday. I mean, the stock market seemed to shrug it off after anticipating it on Thursday with that big downdraft.

But this is a rough set of numbers, Alex. There’s no other way to cut it. The 651,000 jobs lost are part of a 4.4 million job total that has disappeared or have disappeared in the last one year.

WITT: Ron, it is — it’s unprecedented job losses here. I mean, are we going to see it get worse before it gets better?

INSANA: Well, you have to assume so. I mean, the economy appears to be decelerating more rapidly than people thought. Not quite unprecedented. We’re going — we’re going to be worse than the recession of 1980-81, but it’s not yet as bad as the Depression of the 1930s.

It’s going to end up somewhere in the middle, one would assume. But it’s hard to imagine that under these circumstances, given that we haven’t fixed Wall Street yet, we haven’t fixed the housing problem yet, that we’re not going to see more job declines before the economy turns.

WITT: You know, you bring up Wall Street. I want to look at the stock market and how it’s gone. We’re going to graph it for you since Election Day last November.

And here it is. On Election Day, the Dow was at 9,625 and change; January 20 — Inauguration Day — it was at 7,949. And yesterday the Dow is at 6,622, a drop of nearly 3,000 points just since Election Day. I mean, any explanation as to why Wall Street has not taken to everything that President Obama is trying to do?

INSANA: Well, I think that’s only part of the story. I mean, first, the banking system remains under severe stress. We haven’t been able to determine yet whether or not there’s an adequate plan to restore the solvency of our biggest banks and financial institutions. That’s a primary concern. On top of that, it seems that Wall Street’s become somewhat concerned about Washington’s inability to chart a very clear course for how we’re going to come out of this.

The stimulus, some believe, was too small — believe it or not — that it’s not large enough to stimulate enough jobs to turn the economy around. And then beyond that, the president’s bailout plans haven’t taken shape and haven’t been given enough detail for people to feel comfortable.

And then he immediately turns to health care before having solved the economic problem, and I think that’s gotten some people concerned that the focus isn’t on the economy.

From the March 6 edition of MSNBC’s Morning Joe:

The thing that’s frustrating us — we’ve been frustrated about the lack of Republican leadership — but we’ve also been frustrated about the lack of clarity out of the Treasury Department. We’ve been showing graphics of the Dow Jones just collapsing since Barack Obama’s election. Can you tell us what’s going on in the Treasury Department?

DAVID GREGORY (host, Meet the Press): No. And it doesn’t seem like the Treasury Department’s got a handle on that, either. I mean, the difficulty is — and the White House knows this — Secretary Geithner has not established his credibility with the American people or with Wall Street. He’s obviously got credibility there. He’s got a long period of time there and certainly knows everyone there, but has not in this capacity established his credibility. He does not have adequate staff to take on this crisis.

And there is a vacuum here. The president is trying to fill it in most respects, but it’s simply not enough. This confidence question, I think, is huge. The lack of clarity — they have yet to really decide how they are going to take on the most difficult part of this, which is, how do you clean up these balance sheets of the major banks?

As [MSNBC political analyst] Pat [Buchanan] and I were talking about, remember back in the Great Depression — I don’t remember, and I know you’re too young to remember — but what FDR did by closing the banks immediately was address this confidence question.