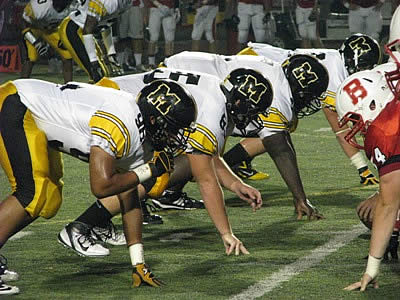 Marian’s defense came up with several huge plays to spark the visiting Spartans to a 27-7 ESCC victory over Benet Academy on Friday at Benedictine University. (Photo: MCHS)

Lisle, IL-(ENEWSFP)- With a stalwart effort already in the books, Jack Ziltz provided an exclamation point for the Marian Catholic defense on Friday night.

With a burst into the backfield, the senior defensive lineman pinned a 5-yard loss on Benet tailback Mike Odom for a safety, providing the final points on a 27-7 East Suburban Catholic Conference victory at Benedictine University.

The defensive effort backed up the usual dominant splash by senior tailback Jeruel Taylor, who beat the heat with 27 rushes for 195 yards and scoring jaunts of 22 and 2 yards.

Ignited by a defense that allowed just 7 rushing yards for the night, the Spartans (2-0, 2-0) gained an overall yardage domination of 442 to 211.

After the Marian offense put up 51 points in an opening-game victory, the Spartan defense wanted to make sure it shouldered some of the load on Friday.
"We didn’t get enough pass rush in the first week," explained Ziltz, who teamed with Robert Ruiz, Matt Hurt, Jacob Bishop and Alexander White on an impressive defensive front. "I told the guys on defense that we needed to pick it up. The offense and Jeruel did a great job last week, but we had their backs this week. Today, a lot of things just clicked for us."

The defense was consistent throughout, as the bulk of Benet’s offense came on pass plays of 85 and 41 yards. The Spartans also made a goal line stand at their 1-yard line to open the second half, as Ziltz and Hurt combined on the fourth-down tackle.

While the Redwings (0-2, 0-2) did gain 204 yards through the air, the defensive backfield also made its mark with interceptions from Pat Swanson, Justin Harris and linebacker Byron Munoz.

The goal line stand was critical, as Marian held just a 13-7 lead at halftime despite outgaining Benet in the opening half, 248 to 92.

Marian quarterback Robbie Cifelli opened the scoring with a 10-yard touchdown run midway through the opening quarter, as Munoz’ kick would be the only successful Marian conversion for the night. After Benet tied the score with the 85-yard connection, Marian took the lead for good when Taylor capped a 12-play, 73-yard drive with a 22-yard touchdown run.

The goal line stand maintained the lead for Marian, but the Spartans couldn’t gain breathing room until the fourth quarter.

After a big third-down conversion from Cifelli to Randall Wells (four catches, 65 yards), Taylor followed linemen Kevin Pawlak and Jesse Kilborn into the end zone for a 19-7 command.

One play later, Harris’ interception set up Marian at the Benet 38-yard line. Faced with fourth-and-13, Cifelli hit Wells with a 15-yard scoring strike and the clincher at 25-7.

If Benet had any faint comeback hopes, the were dashed on the home team’s next possession when Ziltz pounced on an Odom fumble at the Benet 32-yard line. Marian didn’t cash in, but David Angell’s eventual punt backed up the hosts to their own 9-yard line.

After David Sowell darted into the backfield to pin the Redwings with a 4-yard loss, Ziltz followed with the safety.
"We put a lot more focus on our pass rush and getting pressure," explained Ziltz. "They threw the ball a little tonight, but we forced them into a lot of throws. We knew they were going to pass a lot, but we were in the right places at the right times. On the safety, I was just flying into the backfield and trying to be as fast as I could. We just played a lot harder tonight."

Benet had little choice to try to pass on the Spartans, as 17 rushing attempts netted just 7 yards. Marian threw the Redwings for losses or no gain on eight of the 17 rushing attempts. And while Benet gained 204 yards via the air, it was a less than efficient 12-for-30 with the three interceptions.

Meanwhile, Cifelli had a less-than-flashy, yet efficient night in the air. Along with rushing 12 times for 44 yards, he finished eight of 14 for 110 yards and the score. A nifty 32-yard toss to Dominic Pascale provided Marian with its initial first down of the contest.

As usual, Marian made its mark with the infantry as well. Taylor’s huge night was paved by an offensive line of Michael Coda, Phil Faso, Angell, Pawlak and Kilbourn. Overall, the Spartans rushed for 331 yards and an average of 5.5 yards per carry.

Troy Nutall added 52 rushing yards on 10 totes and Wells finished with 45 yards on the ground. Marian totaled 14 first downs via the ground, while Benet recorded its initial rushing first down with 1:32 to play in mop-up time.

The Spartans will gun for a 3-0 start next Friday when they host Nazareth Academy at 7:30 p.m.

Sophomores: The young Spartans fell for the first time this season with a 31-7 setback to Benet.