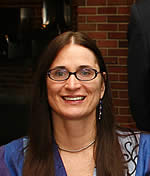 Drawing on her expertise, Bristo will also deliver a presentation on civil rights, accessibility, and the effect and importance of the Americans with Disabilities Act on Friday, February 4. The lecture begins at 3:30 p.m., in the Hall of Honors on the campus of GSU. The presentation is free and open to the public.

Bristo was integral in the creation and passage of the landmark Americans with Disabilities Act of 1990 for which she received the Distinguished Service Award of the President of the United States. She is the founding director and current CEO and President of Access Living, an organization dedicated to improving access and opportunity. Bistro has held three presidential appointments and one congressional appointment and served as a delegate to the U.N Convention on the Rights of Persons with Disabilities.