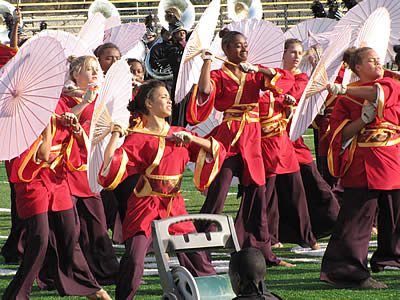 Indianapolis, IN–(ENEWSPF)– The Marian Catholic High School Marching Band, one of only 12 schools in the nation to reach the finals of the Bands of America Grand Nationals this weekend, captured 3rd Place overall on Saturday night at the Lucas Oil Dome in Indianapolis.

The Marian Band, which will represent Illinois in the Tournament of Roses Parade® on Jan. 1 in Pasadena, CA, also won its 30th consecutive Illinois Marching Band state championship in Class on Oct. 24 at Illinois State University.

Making its record 26th appearance in the BOA Grand Nationals, the Marian Bands has won a record seven Grand National Championships, the last coming in 2000.

The Spartan Band was the lone Catholic band among the 12 Finals qualifiers, as well as the lone representative from Illinois .

Juan Diego Villasenor, a 2009 graduate of Marian Catholic High School and former band member, said Marian actually was in a statistical tie for second place with L.D. Bell High School, of Hurst, Texas. Both schools earned a final overall score of 95.25. In the event of a tie, Villasenor said, Bands of America considers category scores, beginning with the respective bands’ scores for General Effect.

“The GE tie-breaker is a rule that states in the event of a tie for placement, the tie is broken by the Generel Effect total score,” Villasenor said. “L.D. Bell won General Effect over Marian, so they got second place, and that’s why Marian got third.” Mr. Villasenor works on the percussion staff of Lawrence Central High School in Indianapolis, IN. Lawrence Central placed eighth overall this year at BOA.

Final ratings are as follows:

* In Bands of America Championships, in the event of a tie for placement, the tie is broken by the General Effect total score.