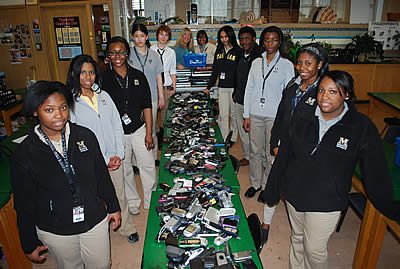 Chicago Heights, IL-(ENEWSPF)- Earth Week at Marian Catholic proved successful thanks to the efforts of Generation Green, the student group that keeps conservation, recycling and environmental awareness at the forefront of daily activities on campus, not only during Earth Week, but year round.

Perhaps the most impressive initiative was the cell phone, laptop, and digital camera recycling drive which took place the week of April 16-20. Nearly 500 cell phones, laptops and other digital devices were accumulated by EMMAUS classrooms (Marian Catholic’s version of homeroom). Recycling these types of devices keeps toxic heavy metals out of the environment and also reduces the need for mining certain metals from the Earth.

Each day of Earth Week, students listened to announcements of simple things everyone can do to help the environment, along with viewing slide shows during lunch periods in the Leadership Center. The building was blanketed with ecology and environmental fun facts posted in hallways, on lockers, and in classrooms as well.

The biggest event surrounding Earth Week will actually take place on Saturday, May 12 at the Chicago Heights campus.

Generation Green will host a free Electronics Recycling Drive in the Joe Orr Road Parking lot from 10:00 a.m. to 2:00 p.m. The event is open to the public and free, even for the disposal of large appliances like stoves, refrigerators, washers and dryers. Plenty of Marian Catholic students will be on hand to do the unloading! If it plugs in – it can be recycled!