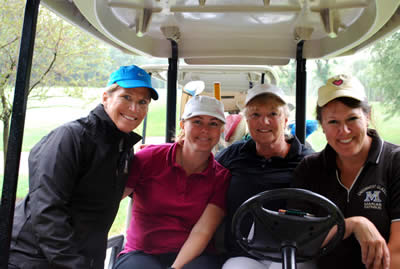 Chicago Heights, IL–(ENEWSPF)– It started with a light, consistent mist as golfers prepared for the 23rd Annual Marian Catholic Endowment Golf Classic on August 13, 2012 at Flossmoor Country Club and Idlewild Country Club. As the day progressed, the rain followed. The mild to moderate rainfall covered the golf courses while 165 golfers, unaffected by conditions, played their rounds. Whether to support Marian Catholic High School’s Endowment Classic Scholarship Fund, or to enjoy the day with good friends and colleagues, the classic was a tremendous success.

The 2012 EGC raised $109,000 exceeding the $100,000 goal. First-year manager of the popular event, Patricia Trebe, commended the Advancement Office leadership and the team effort along with the golf committee of 24 members, co-chaired by Greg Underwood, Flossmoor, IL and Mark Peifer, Munster, IN.

Established in 1989, the Marian Catholic Golf Classic has focused on building a future of scholarships through endowment. “The balance in the Endowment Golf Classic account grows stronger every year,” said Sr. Judine Hilbing, O.P., President of Marian Catholic. “The scholarships we award are funded by the market return on investments, so all the proceeds from this event strengthen the principal investment of the endowment.”

Mike Kennedy ’80, who participates annually with a five-some that’s made-up of elementary to high school classmates and friends, said, “I was blessed with a Marian Catholic education by my parents and I have both a duty and a desire to share that same blessing with others. The Endowment Classic is a good way to give back and to have a great time doing it.”

At the start of play, golfer guests were welcomed and thanked by current EGC Scholars, William Perkins, a junior, and Hannah Schmitz, a senior. Each shared with the golfers and sponsors their personal reflection on the scholarship program, promising “not to let them down” as they pursue academic studies along with band and lacrosse, respectively, helping them to become Scholars with a Soul in the Marian tradition.

For 35 students this past school year, the Endowment Golf Classic was more than just a golf outing. For them, it meant the advantage of a Marian Catholic High School education through the Endowment Classic Scholarship Fund. The fund has grown to become the largest scholarship within the Marian Catholic institutional endowment portfolio, posting more than $2.3 million, awarding $80,000 in scholarships this past year to students of solid academic promise, demonstrating financial need. This funding achievement is only possible because of the loyal support from our MCHS community and stewardship of the Dominican Sisters and the Board of Directors.