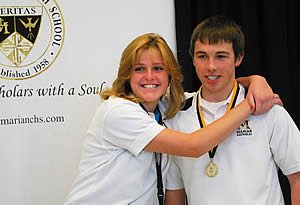 MCHS seniors Chandler Todd and Jay Hochstetler have been friends and classmates since their grade school days at St. Liborius in Steger. (PHOTO SUPPLIED)

Medals of academic achievement given by administration

Chicago Heights, IL-(ENEWSPF)- Marian Catholic High School honored 69 sophomores, juniors and seniors at their annual Academic Breakfast on April 28. Students honored have earned a grade-point average of 4.0 or higher in all semesters at Marian.

“The rigors of doing homework and preparing for tests aren’t something you decide to do once in a while,” she continued. “It’s something you’ve built into your regular routine, always being in top condition, always reaching for the goal of academic excellence.”

“Our hope for you is that you continue as lifelong learners, motivated by your personal goals, encouraged by parents who love and support you, and guided by teachers who coach you along the way,” Hilbing stated.

The following members of the Marian Catholic community were honored for their academic achievement:

Previous articleIn and Around Park Forest Week of May 9, 2011
Next articleYom Ha Shoah Remembered at Temple Anshe Sholom (Vidoe/Story)