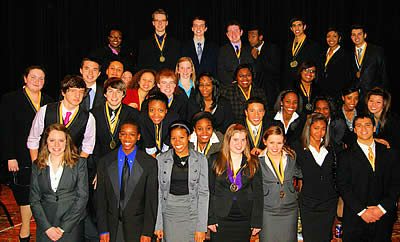 Spectators at the event included Sister Judine Hilbing, O.P., Marian Catholic President, who remarked, “What a wonderful opportunity to see so many extremely talented young people at one contest. Watching the finals of the Humorous Interpretation entries was like being in our own little comedy club. I couldn’t imagine being a finals judge and having to assign places to the participants,” she said.

“These students are the best of the best when it comes to speech competitions,” he said. “It was a pleasure to host such a well-attended event and witness firsthand the dedication and talent they all put forth. Special kudos to assistant speech coach Maureen Kelly who did an amazing job putting this tournament together.”

Speech Team competition swings into high gear with contests and tournaments nearly every weekend until the State Finals at the end of February.