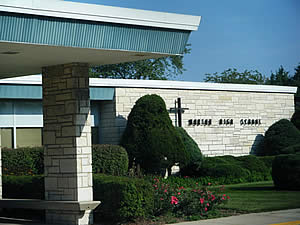 “More than 300 of our students will be on hand to conduct personalized family tours,” Marian Catholic Assistant Principal of Student Activities John Kozojed said. “Open House provides prospective families with an excellent opportunity to interact with the students, faculty, staff, and parents of the Marian Catholic community. People recognize Marian Catholic for excellence in the areas of leadership, academics, fine arts and athletics.  Come and experience the excitement of the Marian Catholic family.”

The commitment to excellence in leadership is witnessed in the copyrighted four-year leadership program incorporated into the curriculum. It is the only high school program of this nature in the country.

For those interested in the Fine Arts, Marian Catholic has excellent programs waiting for you. The seven-time Bands of America Grand National Champion, Marching Spartans will show a video of their 2013 performance.  They recently brought home their 34th consecutive state championship in class and ninth place at Grand Nationals and will perform at the 2013 Macy’s Thanksgiving Day Parade®. Witness the majesty of the madrigal choir and Speech team as they perform at various times during the Open House. Marian Speech captured third in state in 2013. Tiffany Pia Lyander ’13 placed first in Poetry Reading, and Cooper Packard ’14 finished second in Special Occasion Speaking. The Speech Team, Group Interpretation, and Performance in the Round have earned 8 State Championships from 2006-2013. The Art Department will display the student’s skill through dramatic and thought-provoking pieces.

Take time to learn about the $1.2 million annual scholarship program or the $18 million in college scholarships awarded to our senior class last year.

Recruitment Director, Sr. Dorothy Marie Solak, O.P. said, “If you want a school that will help you grow spiritually, help you develop leadership skills, give you the opportunity to participate in a wide range of extra-curricular activities, provide you with the opportunity to develop friendships that will last a lifetime while also giving you the opportunity to excel in academics, athletics, and fine arts, then Marian Catholic is the school for you! Come and experience Marian Catholic at our Open House onDec. 8! Take our entrance exam on Jan. 11 and be a part of the Marian Class of 2018!”