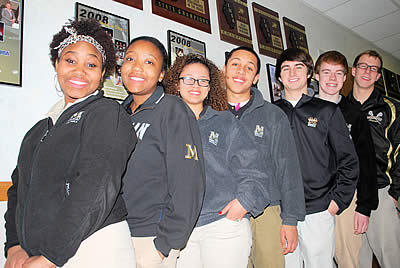 Chicago Heights, IL-(ENEWSPF)- The Marian Catholic Speech Team is gearing up for regional and sectional competitions by taking 2nd Place at the prestigious Downers Grove South Varsity Invitational Tournament last Friday and Saturday. From among the 49 high schools registered, 39 teams participated (10 withdrew due to the weather) and 22 schools sent competitors into the finals. With only one point separating first and second place, Coach Mark Donaway was thrilled with his team’s performance.

“We were very fortunate to have so many of our students make it into the finals,” he said. “We knew the competition was going to be tough because we’ve seen some of the other teams at previous tournaments.”

Veteran speech team members have been working hard to polish their performances leading into these final competitions where the possibility of a State Championship helps motivate every presentation.

“This is the accumulation of four years of practices and performances,” said MCHS senior Jaboukie Young-White, a double medalist this past weekend. “It is truly a process begun as freshmen and built over time.”

“Time management is very important because there is a bit of overlap between fall sports, and speech team practices, then speech tournaments and spring sports. The speech season is shorter, but can be really intense as we head into regional and sectional competitions,” he said.