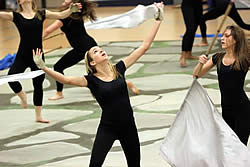 First, a primer on guard lingo and classifications:

Winter Guard, as described by WGI (Winter Guard International) Sport of the Arts, was formerly an indoor color guard competition, but is now an indoor guard and percussion ensemble competition. The Scholastic Division is limited to high school affiliated groups and is broken down further into four Classes; Regional A (beginners), AA (intermediate), Open (advanced), and World (seasoned groups). The Independent Division is not bound by high school affiliation and competitors must be 21 or younger, however, the World Class in the Independent Division has no age limit.

The Marian Catholic Winter Guard, which participated in WGI competition last year in Dayton, OH, in the Scholastic Division, Open Class, won first place honors, and has been elevated to World Class this season. At the Lake Central High School Invitational, both the Marian Catholic World Class, and the Class AA teams won first place from among dozens of participating schools.

At the Naperville Central High School “Stepperette” competition the next day, both teams again placed first in their classes from among even more schools.

“I am excited about the future of the Marian Catholic Color Guard program,” Branson said. “The girls are hard working, compassionate, and embody the values held by the Marian Catholic community. I am thrilled to enter this new class, and excited to show the community what we’re about.”