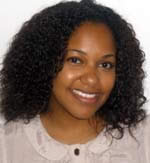 Chicago Heights, IL-(ENEWSPF)- Stephanie Erazo of Hammond, a 2010 graduate of Spelman College in Atlanta, and 2006 graduate of Marian Catholic High School in Chicago Heights, has been awarded a Fulbright U.S. Student Program scholarship. She will teach English as a Foreign Language in Spain for a year.

Erazo decided to apply for the Fulbright Award after studying abroad in Seville, Spain.

“The application process was very long and intense,” she said last week as she prepared to leave for Spain. “After writing two extensive essays, gathering letters of recommendation, and going through a review board, I was thrilled to learn that I had been awarded the scholarship.”

Erazo is one of over 1,500 U.S. citizens who will travel aboard for the 2010-2011 academic year through the Fulbright U.S. Student Program. Recipients of Fulbright grants are selected on the basis of academic or professional achievement, as well as demonstrated leadership potential in their fields.

As a Fulbright Scholar in Madrid, Erazo plans to work with North African women and children immigrants, in addition to teaching English. After her Fulbright experience, she hopes to obtain her master’s degree in international affairs, and eventually become a U.S. ambassador and Foreign Service officer.