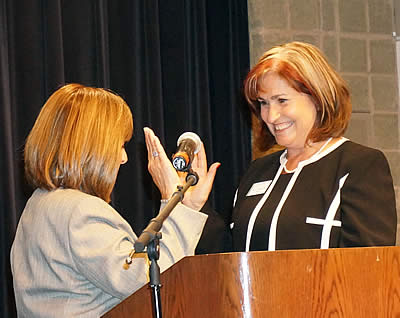 Winfree was selected from a field of 58 candidates that responded to a nationwide search.

“Dr. Winfree brings a wealth of experience to this position, both as a student and as an employee because of her extensive career at PSC,” said Jacqueline Agee, chair of the PSC board of trustees, during her remarks.

The ceremony was marked by three standing ovations during speeches from community members, college faculty, students, and staff.

Frank S. Walker, student member of the PSC board of trustees, spoke for the student body, saying this was a historic moment, and Dr. Winfree’s story and message resonates with PSC students.

“You convey to us that if you work hard, it does not matter where you came from, you can rise to the top. You are a hope and inspiration to us all,” he said.

Chicago Heights Mayor David A. Gonzalez, Chairman of the Chicago Southland Chamber of Commerce Kenneth A. Jenero, State Representative Will Davis, and President of the PSC Foundation Dr. Anthony Maoloni, all congratulated Winfree and commended the board on their excellent choice of Winfree as president.

All three PSC union presidents spoke about their hopes of working with Winfree to move the college forward to continue being the higher education destination of choice among district residents.

Saying this was her dream career and that she basically grew up at PSC, Winfree stressed that she could identify with PSC students because, during her time as a student at the college, she had been working full time, had a family, and was attending school as a non-traditional student.

“I came to PSC to take a computer class and I never left,” Winfree said. Progressing through the ranks first as a student, then an employee, adjunct instructor, administrator and then as president, she said she is Prairie State.

“PSC changes lives every day. We represent opportunity, we remove fear, and we instill hope, and we will help find the potential for every single student who walks through our doors,” Winfree said.

Winfree commented that community partnerships will be emphasized and formalized moving forward, and all of the college’s activities will be guided by the college’s strategic plan.

She ended her speech by thanking everyone in the audience for being a part of her successful journey. After graduating from PSC with an Associate in Arts degree in General Studies, she received her Bachelor’s of Arts in Communication Studies and Masters of Arts in Communication Studies/Human Performance and Training from Governors State University. In 2012 she obtained her Ph.D. in Education and Human Resources from Colorado State University.