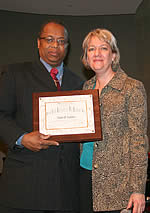 Chicago Heights, IL–(ENEWSPF)– When the Prairie State College (PSC) music department needed music stands, he bought them. When 700 Chicago area students came to PSC for the Jazz Fest, he volunteered his time. When the Tall Arts Grass Association needed a board member, he stepped up.

That’s just the kind of person Howard Luckey was.

Luckey was a long time social science faculty member at PSC who recently passed away. To honor his dedication to music education in the south suburbs, an award was established in his name.

“Luckey was a true arts patron who understood the importance of the arts in people’s lives and the impact they have on intellectual, creative, and emotional growth,” said Valerie Nicholson, professor of music and coordinator of the college’s annual Jazz Fest.

The Howard Lucky Excellence in Jazz Leadership award honors an individual or group who has, with exceptional humility and vision, consistently and significantly contributed to the advancement of jazz and jazz education in the Chicago south suburban region through educational activities, performances, promotional efforts, and by embracing the spirit of the collective community.

At the college’s Jazz Festival on February 19, the first ever award was bestowed upon David Eanes, director of bands at Thornridge High School.

“A teacher’s effectiveness can be measured by tracing the paths of their former students,” said Nicholson. “The list of David Eanes’ students who have gone on to significant careers as performers and teachers of music is long and impressive including many who are music educators in the south suburbs.”

Roosevelt Griffin, director of bands at Gwendolyn Brooks Middle School in Harvey, was one of Eanes’ students.

“When I was growing up, I didn’t have a father, and he stepped in and became the father figure and role model in my life,” said Griffin. “I apply that same compassion he has for his students to my students.”

This isn’t the first time Eanes was recognized for his dedication to his students. In 2007, he received the prestigious Golden Apple award.

“On behalf of all the jazz educators in the south suburbs, I am happy to accept this award,” said Eanes.