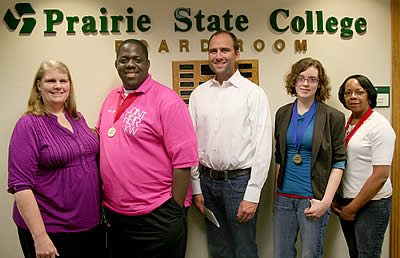 Chicago Heights, IL–(ENEWSPF)– Prairie State College student Dexter Overall hopes to win an Academy Award for his best original screenplay one day. Although it is a big dream, it is not out of reach. Overall won second place in drama for the first act of his screenplay, “The Strangest Places You’ll Find Love”, at the Illinois Skyway Collegiate Conference Writer’s Festival held at Prairie State College on April 22.

This is the second year in a row that Overall received recognition at this annual competition; last year he received first place.

“It’s exciting that other people notice my work because it’s my passion,” said Overall, of Chicago Heights. “I have my own theater company and will put on a performance of the play this spring.”

The play will be performed on June 5 at 7 p.m. in the college’s Business and Community Center Auditorium.

“For the third year in a row, Prairie State College dominated this competition,” said Patrick Reichard, associate professor of English. “Of the 12 awards given, our students received four of them: two first place finishes and two second place finishes.”

Wasney was surprised that she won first place for her poem. She said it cemented the fact that she made the right decision to return to school as an adult.

“I was stunned I won because my poem was so different from the other entries,” said Wasney, of Park Forest. “I am having so much fun writing and learning, and I’m so glad that I came back to school.”

McClaney is also an adult student, and she too was surprised that she won an award for her poem.

“I couldn’t believe it when they called my name,” said McClaney, of Park Forest. “My poem was written from the heart, which made this award so special.”

Jaros has been writing screenplays, poetry, and short stories since she’s been eight years old. She wasn’t sure if she was going to enter the competition, but did so 20 minutes before the deadline.

“I’m ecstatic that I won first place for my play, and I hope to get it produced,” said Jaros, of Glenwood. “I had a wonderful experience at the competition and festival. I met a lot of great people and made awesome contacts.”