Rich East Caps Strong, Successful Cross Country Season With 6 Qualifiers at one of the Strongest Class 2A Sectionals in the State 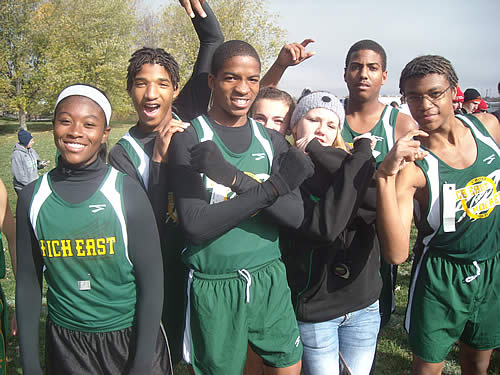 Park Forest, IL-(ENEWSPF)- Six Rich East Cross Country runners capped one of its most successful seasons in a long time as the Rockets sent six harriers to the Class 2A Peoria-Notre Dame sectional meet last Saturday.

Out of a highly-competitive field of nearly 160 runners at Saturday’s meet, Jones placed 64th with a personal record time of 20 minutes, 13 seconds. Abbott, running cross country for the first time this season, ran a PR time of 21:43 (121st), Minnich had a time of 22:42 (135th) and Magee, despite an ankle injury toward the end, had a RP time of 23:30 (145th). Minnich is the younger sister of Bryan Minnich, who won all-conference, all-regionals and all-sectional honors and qualified for the state cross country finals for Rich East in 2008, the last Rocket to make it to the state meet in more than 20 years.

On the boys side, the Rockets also capped their successful season at the Peoria Sectional.

The girls have much to look forward to next year.

"This is the most runners that have qualified for sectionals in a long time," said Rich East girls cross country coach Christy Cook." Although Janiah (Jones) and Sarah (Abbott) ran their fastest times of the year, it just wasn’t quite enough to move onto state. But this was one of the most competitive sectional meets in the state. The other two runners competing were Reilly (Minnich) and Connie (Magee), who also ran very well.

"The Rocket girls had a very successful season, and all runners will be returning, so next year will be even better!" Cook added.

It was a competitive field as the top five girls times at the Peoria-Notre Dame Sectional were all under 18 minutes, with the top time coming from Stephanie Saey of Galesburg (17:20). Jones was 58 seconds from matching the final qualifying spot time of 19:15 from Ashlee Knott of Washington, who finished 18th.

On the boys side, it was an equally competitive field, if not moresoo at The Peoria Sectional. The winning time was a 15:06 by Brendan Hoskins of University High in Normal. The top five finishers were all 15:23 or under and the top seven advancing individuals were between 15:33 and 15:57. Almost like the girls meet, one had to place in the top 19 to advance to the state meet.

For the Rockets’ Heard and Mason, however, it was a nice way to end their season. On high notes and personal bests.  Mason cut nearly three minutes off his best time of last season. Heard also cut a lot of time of his 2011 best in his last high school race. Co-Captain Nick Bates, is also graduating in the spring.

"All three runners put in a lot of time and effort this season," said Rich East Boys Cross Country Coach Kevin Kredens. "Heard and bates however, will be graduating in the spring, but Mason, will be returning for his third cross country season, as well several other younger Rocket boys harriers. It will kind of be a rebuilding year, but those kinds of years can be exciting.

"New runners coming in can see the success we have had and hopefully that will fuel interest in drawing them to the team," Kredens added. "We are losing two good runners and leaders though in Heard and Bates, who was a strong leader and captain on the team the past two years."

Other Rocket Cross country notes…At the recent Morris Regional meet, Heard ran a then-personal record 17 minutes, 32 seconds, finishing in seventeenth place. Jones also finished in 17th place in the girls race with a 21:12. Both also again placed in the same spot the previous week at the Southland Athletic Conference meet as both finish third. They also repeated as all-conference runners …  Also the recent Morris Regional, Mason ran a PR 20:39. On the girls side, Abbott ran a 22:21, followed close behind by Minnich with a 22:25 and Magee’s 22:31.

"I am so proud of Leon and Kentrell and what they have accomplished this season," said Kredens. "They really have been focused since the beginning of the season. I am happy for them that they got to see that hard work will produce results."

On the girls side at the Morris Regional, who added she is also very proud of the hard work her girls team has put in (Dayinaira Lefko, Dominique Hunt and Candance Brogodon, all of whom also PR’ed at the Morris Regional). The good thing is that we all of those girls returning next season."

The IHSA State Cross Country Meet will be held on all three levels, 1A, 2A and 3A on Saturday, Nov. 2, at Deitweiller Park in Peoria. The first race is scheduled to commence at 9 a.m.