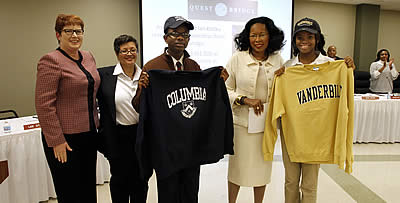 “Southland seniors have been accepted on an early admission basis to 40 colleges and universities to date, including 22 private institutions,” said Ron Anderson, the school’s college counselor.

Several students have been accepted at multiple institutions and others are awaiting word.

Ian Katiku, 17, of Park Forest and Asia Jenkins, 17, of Olympia Fields, each received scholarships valued at $260,000 for four years of undergraduate studies at Columbia University and Vanderbilt University respectively.

A dozen of their classmates earned four-year renewable scholarships averaging $ 52,000 each and others have received as much as $25,000 from colleges and universities.

“News of such excellent accomplishments, coming as it does in this season of promise and prophecy, is an affirmation of everything I’ve believed in throughout my own life and professional career,” said Dr. Blondean Davis, CEO of Southland College Prep.

“These college scholarship awards aren’t just about money—they offer something far more valuable—a hope for a future,” she said.

“The substance and size of these scholarship and merit awards to Southland seniors by first rate higher education institutions coupled with early admission to quality colleges and universities are proof that our dream is becoming a reality,” Dr. Davis said.

“Southland’s students, who are with few exceptions, African-American young people many of whose families are economically diverse, competed in a public lottery to earn one of 500 seats in this new charter school that opened in the fall of 2010 to serve nine south suburban communities.

“At Southland, students spend a nine-hour European model school day pursuing a rigorous academic curriculum of science, math, technology, foreign languages and fine arts that earns them 32 credits– more than one full year of courses completed by most other Chicago area high schools in the course of four years,” said Dr. Davis said.

“Our goal is to offer Southland College Prep students something that life often doesn’t give today’s high school students—a solid preparation to become citizens of the 21st century,” she said.

“While Southland’s days are long and the curriculum challenging, the faculty and staff of this new charter school are focused on preparing our students to earn a four-year college degree from an accredited institution so they may expand their horizons,” she said.

For many of our students, they will be the first in their family to achieve the goal of earning a college degree, she said.

“At Southland, we believe that young people can achieve their highest potential to learn, despite socioeconomic realities that frequently are cited as insurmountable barriers to achieving optimal educational results.

Outside of her high school activities, she has been an active participant in Girls4Science and Project Syncere, two independent non-profit organizations that are focused on encouraging girls to focus on science, technology, and engineering. Jenkins is also a volunteer at Missionary Baptist Church on the south side of Chicago.

Katiku, a native of Nairobi Kenya, is treasurer of Southland’s National Honor Society chapter and  active in the school’s Interact Club that organizes and executes multiple service projects for people in need.  He is also an award winning member of Southland’s speech team. Last year, Katiku placed 2nd in Impromptu Public Speaking in the IHSA Regional tournament and took third place in Extemporaneous Speaking.

He plans to pursue a career in finance and economics.

Southland College Prep opened in August, 2010. It is the only public charter high school in Chicago’s suburbs.

Admission to Southland is on a non-discriminatory basis with respect to race, ethnicity, disability and religious preference. Admission to the school is based on successful completion of elementary school and residence in District 227’s four elementary school districts which include: Country Club Hills, Flossmoor, Hazel Crest, Homewood, Matteson, Olympia Fields, Park Forest, Richton Park and Tinley Park.