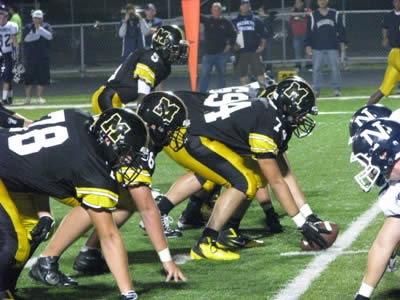 The Marian offense racked up 300 yards rushing Friday, but fell for the first time this season in a 35-19 ESCC loss to visiting Nazareth Academy. (PHOTO SUPPLIED)

Despite rushing for 300 yards, the Spartans fumbled an astounding 10 times- giving away three of them to Nazareth.

Defensively, Marian had the Roadrunners wrappe d up several times, only to see Nazareth get away for big gains.

Whether it was dropping the ball or losing a handle on opposing ballhandlers, the effort added up to Marian’s first loss of the season, 35-19, leaving both squads with 2-1 overall and ESCC marks.

Most disheartening aspect of the setback?

Take the fact that the Spartans outgained Nazareth, 385 to 300.

Or that the host team gained a 21-15 advantage in first downs.

How about wasting another dominating rushing effort and ball control that resulted in running 19 more plays (64-45) than the Roadrunners.

The Spartans punted just twice all night, as giveaway fumbles occurred at the Nazareth 27-yard line, the Marian 43 and the Roadrunner 18-yard line. Another drive ended with a fourth-down sack when Marian recovered its own fumble.

While only three of the fumbles went for turnovers, the dropsies had Marian playing catch-up most of the night.

Marian survived its first fumble turnover on the game’s opening series when Nazareth eventually missed a 38-yard field goal. But after a Spartan punt on the next possession, the Roadrunners needed just one play to score on a 50-yard run for a 7-0 command.

The Spartans responded with one of their three long scoring drives on the evening, going 80 yards in eight plays for the tying score. A pair of first-down runs by Matt Simmons moved Marian deep into the red zone, where quarterback Robbie Cifelli scored on a draw from 2 yards out. Byron Munoz split the uprights for a 7-7 stalemate.

After the Spartans force a quick punt, the next possession was halted by another fumble turnover.

This time, Nazareth made Marian pay with a 45-yard scoring drive that put the visitors ahead to stay. The Roadrunners added their second score in less than three minutes when Rudy Romagnano broke out of a seemingly hopeless grasp for his third touchdown of the half and a 21-7 Nazareth lead at the intermission.

Missed tackles led to the Roadrunners’ next score as well when Sean Maloney scampered 37 yards on the initial possession of the second half for a 28-7 bulge.

The Marian offense wasn’t done, however, marching 76 yards on 11 plays to get back in striking distance. A key hookup from Cifelli to Dominic Pascale for 22 yards and an 18-yard burst by Jeruel Taylor moved Marian deep into Nazareth territory. Cifelli kept on the option for a 12-yard score to pull the host squad within 28-13.

The difference on this night was that a Marian defense was finally vulnerable to the rushing game. After yielding just 51 total infantry yards in two opening wins, the Spartans surrendered 240 yards via the ground to the Roadrunners.

Ironically, Nazareth next answered with the pass as Sean Maloney got behind the Spartan defense, making one of only two Roadrunner completions on the night good for a 52-yard score.

Despite a 35-13 deficit, Marian still had some spunk remaining.

Long drive number three went 75 yards in 10 plays. With Cifelli and Taylor churning up most of the yardage on the ground, the senior quarterback finally used the option to find Randall Wells for an 11-yard pitch score. The fifth touchdown of the campaign for Wells pulled Marian to within 35-19 with nearly a full quarter to play.

Despite the two-score margin, a 16-point differential may have been a stretch for a Spartan squad that has been successful on just four of 15 PAT conversions this season.

Nevertheless, Marian forced a quick punt and quickly advanced the ball deep into Roadrunner territory with three first downs. That’s when the fumble bugaboo attacked at the Nazareth 18-yard line.

The Roadrunners put the Spartans out of their misery by chewing up the final 6:41 of clock.

Along with the impressive rushing effort led by an offensive line of Michael Coda, Kevin Pawlak, Phil Faso, Jesse Kilbourn and David Angell, Cifelli was a serviceable 7-for-14 for 85 yards, with four of the completions going for first downs.

The 3-0 start to the campaign would have been nice, considering a visit to defending ESCC champion Carmel Catholic is on tap next Friday at 7:30 p.m. Marian’s last visit to Mundelein resulted in a 20-17 Spartan victory in overtime.

Sophomores: Despite trailing most of the contest, Marian rallied in the late minutes of the contest for a 29-28 victory over Nazareth Academy.