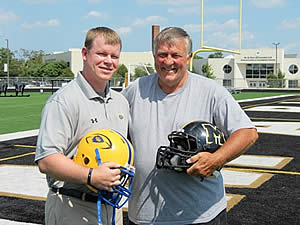 Chicago Heights, IL-(ENEWSPF)- With a football program rich in tradition and playing in one of the most competitive conferences in Illinois (East Suburban Catholic Conference), Marian Catholic is seeking a quick return to prominence after missing out on the IHSA playoffs the last two falls.

The Spartans needed to look no further than a familiar face who knows plenty about winning championships.

“I am excited to come back to Marian and begin working on the football program,” Verde explained. “Marian Catholic has always been a special place for me. It’s a great honor being named head football coach of the Spartans, after Dave Mattio’s retirement from the program.”

“We had many fine candidates interested in the position and are thrilled to welcome Jerry back to Marian Catholic,” Sr. Kathleen explained. “He brings enthusiasm, professional expertise and dedication to our student athletes. His willingness to build on the integrity and leadership of our students, along with an understanding of our school’s tradition and previous success as a head coach, made Jerry an easy choice for us.”

Verde succeeds his former coach Mattio ‘66, who compiled a 251-141 mark in 37 seasons as head coach, good for 19th all-time on the IHSA victories list. In three campaigns with Verde as his starting middle linebacker (1992-94), Mattio led the Spartans to a 30-7 mark, three IHSA playoff appearances and two ESCC championships.

“What a great Christmas present Marian Catholic received when Jerry Verde agreed to become the new head football coach,” Mattio said. “Jerry will bring an uncommon background to the Marian Catholic program, having had success at the high school and collegiate levels as a player and the same with the variety of coaching experiences that have allowed him to reach the level of excellence. His commitment to excellence will immediately impact the Marian Catholic community and the Football program.” 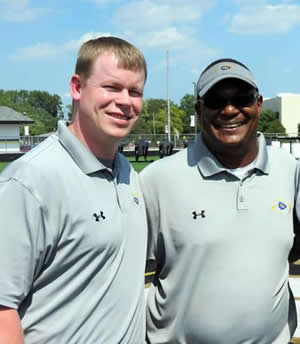 In six seasons at the helm of the Crete-Monee squad, Verde guided the Warriors to a 56-14 mark and a playoff appearance in each year. The recent 14-0 campaign this fall culminated in a 33-26 championship-game decision over Cary-Grove. Verde has also served on the Marian staff previously in 2003 and had assistant coach stints at Homewood-Flossmoor and the University of St. Francis as well.

"Marian Catholic football has a very strong tradition of excellence,” Verde said. “It is my hope and desire to build upon that tradition, and ignite some new interest into the program. Success in terms of grand accomplishments will likely not happen overnight, but the immediate future is crucial in establishing a strong foundation to build upon."

A onetime ESCC Defensive Player of the Year, Verde carried his playing talents to the University of St. Francis, where he earned Midwest Intercollegiate Football Conference First Team All-Academic honors. He remains the Saints’ single-season record-holder for tackles with 140.