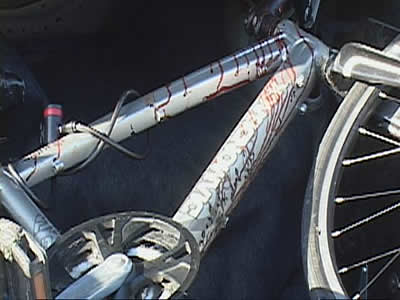 A bicycle dripping with blood after the shooting. (Credit: Todd Sherman/Network Video Productions)

Matteson, IL-(ENEWSPF)- One man is dead and another wounded after a shooting in broad daylight along Old Plank Trail in Matteson on July 6.

According to a statement issued by the Matteson Police Department, on July 6, 2014, at approximately 4:30 p.m., officers responded to the 3800 block of Old Plank Trail following a report of a subject who had been shot.

Upon arrival, officers were met by the victim who advised them that he was accosted on Old Plank Trail. The victim told police he was shot multiple times by an adult male.

The victim was transported to Christ Hospital in Oak Lawn where he was treated for non-life threatening injuries.

The suspected shooter was identified as 34-year-old Marcellus M. Jamison from the 4200 block of W. 216th Street in Matteson.

A short time after the victim was shot, Jamison was found at the intersection of 216th Street and Charleston Road with an apparent self-inflicted gunshot wound to the chest, according to police. Jamison was transported to St. James Hospital in Olympia Fields where he was pronounced dead.

The matter is still pending further investigation, according to police.