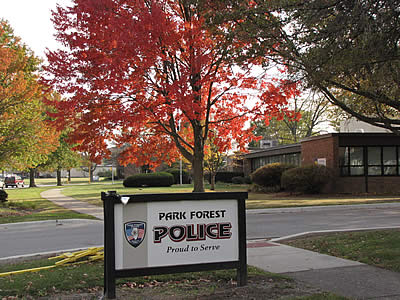 Persons wishing to leave anonymous information on any criminal matters including narcotics or gang activity are encouraged to call 708-748-.4701.

A catalytic converter was reported stolen from a vehicle parked in the first block of Birch Street on October 26.

A gold and diamond necklace valued at $600 was reported stolen from a residence in the 200 block of Juniper Street on October 28.

An electrical box in the first block of Hemlock Street was reported vandalized with spray paint on October 28.

A resident told police on October 28 that she received a phone call from a subject who told her that her computer was about to crash and he was going to assist her in fixing it. The resident allowed the subject to remotely access her computer. The subject then offered her a warrantee for $20. She agreed and the subject related that he only accepted debit cards. The resident gave the subject her debit card number and, after completing the transaction, the resident received notification from her bank that there were two wire transactions, one for $984 and another for $849, in process. She advised that she did not authorize them but learned that the money was in a pending status with Western Union. She would learn later whether the money was retrieved and, if not, it would be returned to her account.

A resident told police on October 28 that she had lost her Illinois Link card and had asked for another one to be sent to her. She returned to her residence on October 27 to retrieve her replacement card and discovered that the letter containing the replacement card had already been opened. The card was activated using her Social Security number. Police have suspect information and are investigating.

Two electrical boxes just south of the entrance to Court H-4 on Western Avenue were discovered to have been vandalized with spray paint on October 28.

Police were dispatched to a business in the first block of Main Street to investigate a retail theft. The investigation continues.

Kendall F. Friend, 35, 15102 Madison Ave., Dolton, was arrested on November 1 and charged with driving under the influence of alcohol, illegal transportation of alcohol, improper lane usage, and speeding over the statutory limit, when an officer traveling northbound on Western Avenue from North Street observed a vehicle traveling southbound on Western Avenue at 55 mph in a 35 mph zone, per the officer’s dash mounted radar unit, according to police.

Michael Williams, 36, 304 W. 34th St., Steger, was arrested on November 1 and charged with driving under the influence of alcohol and illegal transportation of alcoholic liquor when police were dispatched to investigate an accident that occurred in the area of Sauk Trail and Indianwood Boulevard.

The windshield of a vehicle parked in the 100 block of Westwood Drive was reported shattered on November 1.

A front window of a residence in the 300 block of Wildwood Drive was reported shattered on November 1.

The windshield of a vehicle parked in the first block of Dunlap Road was reported shattered on November 1.

The windshield of a vehicle parked in the 100 block of Dogwood Street was reported shattered on November 1.

Darnell A. Howard, 32, 22024 Spring Lane, Richton Park, was arrested on November 1 and charged with driving under the influence of alcohol, endangering the life of a child, speeding over the statutory limit, and improper lane usage, when an officer on stationary patrol facing southbound on Westwood Drive North of Willow Street observed a vehicle traveling southbound on Westwood Drive from Wildwood Drive at 51 mph in a posted 30 mph zone, per the dash mounted radar unit, according to police.

Matthew D. Potts, 57, 318 Gentry St., Park Forest, was arrested on November 2 and charged with leaving the scene of an accident, failure to reduce speed to avoid an accident, and failure to yield to an authorized emergency vehicle when police were dispatched to the intersection of Illinois Street and Orchard Drive in reference to an accident involving a Park Forest Fire Department ambulance.

Frankie L. Agnew, 21, 1637 Ashland Ave., Chicago Heights, was arrested on November 3 and charged with one felony count of possession of a stolen motor vehicle when police were dispatched to the first block of Westwood Drive to investigate a report of a motor vehicle theft.

Michael White, 21, 100 Churn Rd., Matteson, was arrested on November 4 and charged with one count of retail theft, violation of an order of protection, and resisting a peace officer when police were dispatched to investigate a retail theft reported at a business in the first block of Main Street. Dajuan D. Hurst, 33, 303 Waldmann Dr., Park Forest, was also arrested and charged with retail theft.

Leon Dre Agnew, 22, 111 E. Sycamore Dr., Apt. 504, Park Forest, was arrested on November 4 and charged with one felony count of burglary to a motor vehicle when officers patrolling in the Metra Lot, 520 Homan Avenue, noticed a man partially inside a vehicle parked in one of the spots. A Schwinn bicycle was leaning on a vehicle parked in a spot next to the subject, directly outside the open door. When the subject, later identified as Agnew, saw the officers, he immediately fled on foot, according to police.

A diamond wedding ring set, miscellaneous CDs, and three DVD movies were reported stolen from an unlocked vehicle parked in the 100 block of Birch Street on November 5.