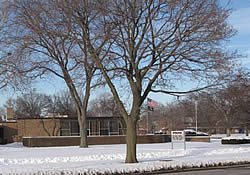 Police observed gang graffiti that an unknown person or persons had spray-painted on the rear of a business in the 100 block of South Orchard Drive on February 13.

Two teenagers were arrested on February 13 and issued a citation charging possession of cannabis when police discovered a vehicle parked illegally in front of a residence in the 200 block of Arcadia Street.

A 19-year-old man living in the 100 block of Birch Street was found dead on Saturday, February 13, the victim of an apparent suicide. Police say they found Hakeem R. Trotter, 19, 152 Birch St., Park Forest, hanging in his basement. Trotter may have been distraught over a relationship, according to police. The case has been forwarded to the Detective Division for further investigation.

Related: Know the Risk Factors for Suicide – There is Hope

Sergio Garcia, 20, 433 Navajo St., Park Forest, was arrested on February 14 and charged with retail theft when police were dispatched to a business in the first block of South Orchard Drive to investigate a complaint of retail theft.

A juvenile was arrested on February 15 and issued citations charging possession of cannabis and a curfew violation when an officer on patrol at 1:44 a.m. in the area of Westwood Drive and Orchard Drive observed the juvenile walking.

Gabrielle M. Waise, 19, 130 Chestnut St., Park Forest, was arrested on February 15 and charged with domestic battery when police were dispatched to the 100 block of Chestnut Street to investigate a report of a domestic disturbance.

Police were dispatched to Rich East High School on February 16 to investigate a report of criminal damage to property. A juvenile allegedly kicked a window causing it to shatter. The juvenile received a 10-day suspension from the school and would have to attend anger management with a school counselor, according to police. The juvenile was advised that the suspension would only be for five days if full restitution for the window was made. There were no arrests.

A license plate sticker of a vehicle parked in the 100 block of North Arbor Trail was reported missing on February 16.

Police were dispatched to the 200 block of Lakewood Boulevard on February 17 to investigate a report of fraud. A resident reported that an unknown subject had used his Visa card at a gas station. The transaction was for $39.63, according to police. Police continue to investigate.

A white and brown Mongoose bicycle valued at $50 was reported stolen from the 200 block of Somonauk Street on February 18.

Marque J. Smith, 21, 2920 S. Jackson Ave. #3, South Chicago Heights, was arrested on February 18 and charged with unlawful possession of cannabis and speeding. An officer observed the vehicle Smith was driving on Sauk Trail past Orchard Drive was traveling at 48 mph in a 35 mph zone, according to police.

Police were dispatched to a residence in the 100 block of Nauvoo Street on February 20 shortly after midnight to investigate a report of domestic battery. There were no arrests, but the victim wanted the incident documented.

The rear window of a van parked in parking lot number two at the Ludeman Center was reported shattered on February 18.