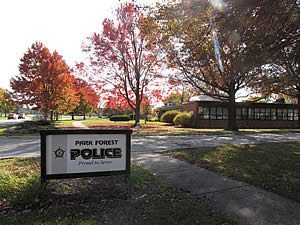 A window of a residence in the 200 block of Kentucky Street was discovered shattered on February 26. Police were dispatched to that residence to investigate a report of a residential alarm sounding.

Ahmeial M. Merrit, 37, 31 McGarity St., Park Forest, was arrested on February 27 and charged with battery, driving under the influence, DUI over 0.08, and issued citations charging unsafe equipment, no rear registration light, obstructed windshield, and operation of an uninsured motor vehicle. An officer on patrol in a parking lot in the first block of Main Street observed that the vehicle Mertit was driving had an obstructed front windshield and no rear tail lights or rear registration light, according to police.

A Gateway 17.3″ laptop computer valued at $1000 and a 37-inch Vizio flat-screen television valued at $600, were reported stolen from a residence in the 400 block of Douglas Street on February 27.

The rear license plate of a vehicle parked in the 200 block of Allegheny Street was reported stolen on February 28.

Two black leather jewelry boxes with various items of jewelry and a bottle of prescription medication were reported stolen from a residence in the 300 block of Oswego Street on February 28. Police say entry was made to the residence by kicking in the rear door.

A black security fire-safe box, a silver clock, two diamond stud earrings, two pairs of gym shoes, and an Xbox 360 game system, all valued at $700 total, were reported stolen from a residence in Somonauk Court on February 28.

A resident told police on February 29 that she learned that her personal information, including contact information for a daughter and son, their addresses and telephone numbers, was used to fraudulently open a credit account in her name with Capitol One. Police are investigating.

Marcus A. Porter, 36, 3028 Western Ave., Park Forest, was arrested on March 1 and charged with domestic battery when police were dispatched to the 3000 block of Western Avenue to investigate a report of a missing/runaway juvenile.

A black HP laptop computer was reported stolen from a residence in the 300 block of Westgate Drive on March 2.

Charles E. Bobbitt, 45, 350 Juniper St., Apt. 101, Park Forest, was arrested on March 2 and charged with possession of cannabis when police were dispatched to the 300 block of Juniper Street to investigate a report of an unwanted subject.

A black Samsung cell phone valued at $600 was reported stolen from a residence in the 300 block of Minocqua Street on March 2.

A resident told police on March 2 that she lost $1790 when she fell victim to a “Secret Shopper” scam. Essentially, she was solicited via e-mail and was sent two fraudulent money orders totaling $1950 which she was instructed to deposit in her bank account and then send money via Western Union to the person who contacted her. She was ostensibly evaluating the service of the Western Union store. She learned from her bank that she will be held accountable for the money withdrawn because she withdrew the funds from her own account.

Police were dispatched to a residence in the 200 block of Kentucky Street on March 3 to investigate a possible home invasion. When they arrived, police observed that a rear entry door was open and the door was damaged. The residents reported that they had gone to sleep at approximately 10:30 PM and later woke up hearing a noise outside of the residence. One of the residents told police that she observed two figures leave the bedroom. Police are investigating.

Police say a resident in the 300 block of Manitowac Street told them on March 3 that, while asleep in her bedroom, she heard a loud “thump.” She got out of bed, walked through the kitchen, and saw three male subjects standing in the foyer of her home. She yelled, telling them that she was going to call the police. The subjects then fled from the residence. Police say nothing was reported missing. Police are investigating.

Michael E. Polka, 44, 440 Niagara St., Park Forest, was arrested on March 3 and charged with domestic battery when police were dispatched to the 400 block of Niagara Street to investigate a complaint of domestic battery.

Police were dispatched to the 2800 block of Western Avenue on March 3 to investigate a report of a disturbance. They spoke to a subject who reported a battery which had just occurred. Police have suspect information and continue to investigate.

A 29-inch flat-screen LCD Samsung television valued at $200, a silver Omega watch valued at $100, a $200 coin collection, approximately $100 cash, and other items were reported stolen from a residence in the first block of Apple Lane on March 4.

Police were dispatched to the 23400 block of South Western Avenue on March 5 to investigate a report of domestic battery. Police have suspect information and are investigating.

Lissa Thompson, 32, 320 Shabbona Dr., Park Forest, was arrested on March 5 and issued municipal citations charging dog bite, dog running at large, fierce/vicious dog, and owning a dog without a license/permit, when police were dispatched to the intersection of Shabbona Drive and Mohawk Street to investigate a dog bite complaint. Police say a teenage victim told them that he was playing with family members at Mohawk School when he saw a large white pit bull dog running toward him. The juvenile said he got scared and attempted to run away from the dog which then bit his left leg, tearing his pants. The dog then began biting his right foot and ankle area. The juvenile said his cousin then arrived, struck the dog with a pipe, at which point the dog released its bite, fell to the ground and was unconscious, according to police. Police observed abrasions to both knees of the victim, along with numerous puncture wounds and lacerations to the victim’s right ankle and foot consistent with a dog attack. The dog was transported to Forest South Animal Hospital.