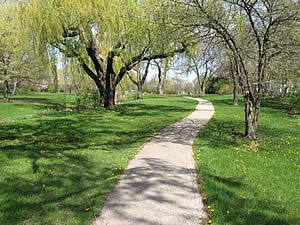 Park Forest, IL–(ENEWSPF)– Editor’s Note: We continue our reporting on news from police reports. Besides covering the many stories from around Park Forest that otherwise might go unnoticed. In doing so, we continue to bring more complete coverage of police reports than is reported by other local media.

An officer said police were “busy” when eNews Park Forest stopped by to read reports on Saturday. While typically not a good sign, police tend to get “busy” as the weather warms up.

Remember to be patient with members of your family and your neighbors. Did you know upwards of 75% of domestic calls are alcohol-related? Think before you drink.

Thanks once again to Ken and Sue Kramer who meticulously proofread these reports every week.

Dwight Humphrey, 32, 24 Apple Lane, Park Forest, was arrested on April 27 and issued a municipal citation charging discharge of an air gun when police were dispatched to the first block of McCarthy Street to investigate a report of criminal damage to property.

An officer was dispatched to the Park Forest Police Department on April 30 to investigate telephone threats complaint. Police continue to investigate.

The rear window of a vehicle parked in the 300 block of Merrimac Street was reported shattered on April 30.

A Sony laptop computer valued at $500 and a PlayStation 3 game system valued at $300 were reported stolen from a residence in the 300 block of Nokomis Street on April 30.

Seven juveniles were arrested on April 30 and issued municipal citations charging trespassing when police were dispatched to the 300 block of Wildwood Drive to investigate a complaint of several juveniles entering a building.

Timothy R. Griggs, 24, 37 S. Arbor Trails, Park Forest, was arrested on April 30 and charged with domestic battery and processed on three outstanding warrants charging disorderly conduct (Chicago Heights, Cook County), resisting a peace officer (Chicago Heights, Cook County), and driving under the influence of alcohol (Park Forest, Cook County). Police arrested Griggs after they were dispatched to the first block of South Arbor Trails in relation to a report of a domestic battery in progress.

The rear window of a vehicle parked in the 300 block of Oswego Street was reported shattered on May 1.

Julius L. Jones, 28, 243 Arcadia St., Park Forest, as arrested on May 1 and charged with a class II felony charge of violation of the sex offender registration act when police were dispatched to the 200 block of Arcadia Street after receiving several anonymous tips that Jones was residing at that address in the Eastgate neighborhood.

Jeffrey T. Williams, 47, 710 W. Mulberry St., Apt. A4, Bloomington, IL, was arrested on May 2 and charged with possession of a controlled substance, a class 4 felony, possession of cannabis, and processed on two warrants one from the Chicago Heights Police Department on a charge of criminal damage to property and the other from the Cook County Sheriff’s police on a charge relating to an alleged probation violation. Williams was arrested after police were dispatched to the first block of South Orchard Drive to investigate a report of a suspicious subject.

A juvenile was arrested on May 2 and charged with possession of cannabis and unlawful use of a weapon when police were dispatched to the first block of East Rocket Circle to investigate a report of a suspicious automobile.

A red Craftsman lawn mower valued at $226 was reported stolen from the front lawn of a residence in the 100 block of Nanti Street on May 3.

Police are investigating a burglary after being dispatched to the 400 block of Suwanee Street on May 3. Police took a suspect into custody and continue to investigate.

A juvenile was arrested on May 3 and charged with obstructing a peace officer. Police made the arrest while investigating a residential burglary.

A resident told police on May 5 he discovered over $15,000 in fraudulent charges made against his debit card, most of them at Wal-Mart stores in Forest Park, IL, and Waukegan, IL. The elderly resident told police he noticed on May 4 that he had not received mail in several days. His wife went to the Post Office and discovered that an unknown person had put a stop to the mail to their residence for an unknown amount of time. Police continue to investigate.

A juvenile was issued a municipal citation charging battery when police were dispatched to the 100 block of Nashua Street in reference to a report of a disturbance.

The silver face plate of a Sony CD player and Sprint car charger were reported stolen from a vehicle parked at the Metra Station parking lot in the 500 block of Homan Avenue on May 5.

Jamaal L. Dennard, 19, 10 Indianwood Blvd., Park Forest, and Coty J. Clifton-Abbot, 19, 22459 Riverside Dr., Richton Park, were arrested on May 6 and issued municipal citations charging solicitation without a permit when police were dispatched to the 200 block of Forest Boulevard in reference to a report of subjects selling CDs in front of a business. Police say Denard told them they were in a rap group and were selling CDs to raise money for a trip to California.

A hitch trailer, IL registration #8848JC-TA, with a composite wood floor and drop-down gate valued at $760, was reported stolen from the parking lot of the Park Forest Animal Hospital, 2348 Western Ave., Park Forest, on May 6.

An iPhone 3G valued at $50 was reported stolen from a student attending Canteen at Forest Trail Middle School, 215 Wilson St., Park Forest, on May 6.

Like Loading...
Previous articlePark Forest’s Talala Elementary School Participates in Bounty’s ‘We Love Our School’ Campaign
Next articleIn and Around Park Forest Week of May 9, 2011