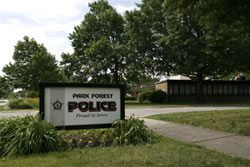 Jesse James Deloach II, 36, 200 Indianwood Blvd., Park Forest, was arrested on November 6 and charged with one count of robbery when police were dispatched to the 100 block of South Orchard Boulevard to investigate a report of a disturbance. According to police, when they arrived on the scene, officers observed a store employee on the ground with Deloach standing over him. According to the alleged victim, Deloach had struck him and threw him to the ground when he had followed him after Deloach had allegedly taken items from the place of business.

Maxine P. Harding, 46, 3314 Western Ave., Park Forest, was arrested on November 6 and charged with endangering the life of a child when pol or ice were dispatched to the 3300 block of Western Avenue to check on the well-being of a young child.

Police were dispatched to the 100 block of Nauvoo Street on November 7 to investigate a report of found property. A resident reported that while outside his house cleaning his gutters and raking leaves, he observed miscellaneous items hidden underneath the leaves in the bushes in front of his house. The responding officer retained and inventoried the property as evidence: one black Brutus amplifier, a Sega Dreamcast game system, and a black CD album containing miscellaneous CDs. The items were prepared to go to the Illinois State Police Crime Lab for further analysis.

A black iPhone and a wallet were reported stolen from a gym bag at Forest Trail Middle School on November 7.

Bradley J. Haemker, 20, 414 Woodward St., P.O. Box 834, Beecher, and Ashliegh R. Graf, 20, 28964 S. Park Ave., Beecher, were arrested on November 7 and charged with possession of cannabis and drug paraphernalia when an officer on patrol observed a vehicle parked at the west end of the Park Forest Aqua Center parking lot shortly before 7 p.m. According to police, the officer investigated because the Aqua Center was closed for the season.

Jibri H. Branch, 27, 4149 Cedarwood Ln., Matteson, was arrested on November 7 and charged with possession of cannabis and an obstructed front windshield. Detectives on patrol in the area of Western Avenue and Sauk Trail reported smelling an odor of burnt cannabis in the air. One of the detectives observed the sunroof open on the vehicle in front of them. The detective also observed an object hanging from the rearview mirror obstructing the driver’s view, according to police.

Aaron Q. Salters, 21, 15352 9th Ave., Phoenix, IL, was arrested on November 8 and charged with possession of a controlled substance and issued citations charging expired driver’s license, operation of a motor vehicle without insurance, and improper left turn. An officer on patrol in the area of Western Avenue and Algonquin Street observed the vehicle Salters was driving allegedly making an illegal left turn from Algonquin Street to southbound Western Avenue. The intersection has a posted No Left Turn sign.

The passenger side door of a vehicle parked in the 300 block of Douglas Street was found to have two holes consistent with a shot from a BB gun on November 8. Police estimate the damage to be $1500. Police continue to investigate.

Carnell P. Woodbury, 23, 14813 LaSalle St., Dolton, was arrested on November 8 and charged with domestic battery when police were dispatched to the 100 block of North Arbor Trail to investigate a complaint of domestic battery.

The front windshield of a vehicle parked in the 200 block of Somonauk Street was discovered shattered on November 8.

A wallet was reported stolen from a vehicle parked in the parking lot of Trinity Lutheran Church on November 8. The reporting victim had gone to church but had forgotten to lock the doors of the vehicle.

A silver Emerson brand DVD player was reported stolen from a residence in the 200 block of Arcadia Street on November 9.

A Panasonic 32-inch LCD-HDTV was reported stolen from a residence in the first block of Cedar Street on November 10.

Sonja Simone Wormbly, 24, 403 Sharpsburg Circle, Birmingham, AL, was arrested on November 10 and charged with no front registration, operating an uninsured motor vehicle, obstruction of justice and resisting arrest when an officer on patrol observed that the vehicle Wormbly was driving traveling westbound on Sauk Trail from Westwood Drive had no front registration plate. According to police, after Officer Rimovsky had initiated a traffic stop and returned to his vehicle to check her driving status on the squad computer, Wormbly exited the vehicle and walked around the front of the vehicle toward the passenger side. When advised to return to the driver’s seat several times, Wormbly allegedly refused, and entered the passenger side of the vehicle, according to police. Officer Rimovsky, fearing that Wormbly was grabbing a weapon from under the passenger seat, ran toward the passenger side of the vehicle to detain her. Officer Rimovsky advised her that she was under arrest. Wormbly then allegedly grabbed Officer Rimovsky’s arm and struck him with a closed fist as he attempted to handcuff her. Rimovsky requested assistance as she allegedly continue to fight him. Other officers responded to the scene and Wormbly was subsequently handcuffed. Her shoes were left in the vehicle she had been driving at the time of her arrest due to her combative state, according to police. The incident was captured on the in-squad camera of the police vehicle, according to police. Police also interviewed a witness who told them that Wormbly allegedly hit the officer at least 10 times.

Ronald M. Wormbly, 57, 136 Well St., Park Forest, was arrested on November 10 and charged with aggravated assault and criminal trespass to state property when he was told to leave the lobby of the Park Forest Police Department after allegedly using obscenities toward police, according to police. He had come to the Park Forest Police Department with other family members after his daughter was arrested. After he had left the lobby, he allegedly returned to the lobby and started to walk toward officers, allegedly yelling profanities.

A 2 1/2 karat white gold engagement ring valued at $8000 and a black iPod were reported stolen from a residence in the 100 block of Shabbona Drive on November 10.

A blue two-door 1995 Chrysler Sebring, Illinois license number A897234, was reported stolen from a residence in the 100 block of Westwood Drive on November 10. The vehicle had been left running in the driveway, according to police.

The left front fender, the driver’s door, the left passenger door, and the left rear fender of a vehicle parked at Forest Trail Middle School was reported scratched with a key on November 11. Police have suspect information and continue to investigate. The owner of the vehicle reported entering into a dispute with the alleged suspect while watching a basketball game at Forest Trail.

A basement window of a residence in the first block of Michael Road was reported broken on November 11. Entry was not gained to the residence.

Graffiti was discovered on the north side of South Suburban Christian School in the 100 block of Chestnut Street on November 11.

Police were dispatched to CVS Pharmacy, 1 Main St., Park Forest, on November 11 to investigate a report of retail theft. A subject allegedly walked to the liquor section, selected six 750 mL bottles of Tanqueray gin, valued at $182.94 total, and left the store. Police have suspect information and continue to investigate.

The rear window of a vehicle parked at Forest Trail Middle School was reported shattered on November 12. The responding officer observed what appeared to be a hole caused by a BB.

A basement well window of a residence in the 300 block of Indiana Street was reported shattered on November 12.