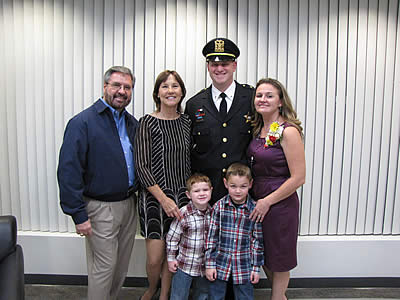 Commander Brian Rzyski, seen here with his family, was one of three officers promoted at Monday’s Village Board meeting. (Photo: Gary Kopycinski)

The following is the narrative read at Monday’s meeting, which contains some biographical information on each officer:

Corporal John Sweitzer has been with the department for eight years and has been a Police Officer for 16 years having previously served with the Village of Chicago Ridge. John grew up in Park Forest and graduated from Rich East High School. Corporal Sweitzer has had a variety of assignments for the department. He is currently a Field Training Officer and has served in the Investigations Division. He was also a Canine Officer. John has received fourteen (14) Outstanding Service Awards, a Meritorious Service Award and a two (2) Term Awards in his career with our Village. He is also a veteran of the Armed Services having served in the Army.

Corporal Sweitzer has his Bachelor’s Degree from Governors State University and is working on his Masters.

He will have his badge pinned on him this evening by wife Jackie. 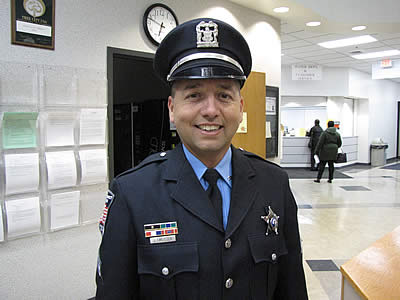 Commander Brian Rzyski is a 13 year veteran of the Police Department having served as a Corporal for the past three and a half years. Brian has spent a large part of his career in the Investigations Division having served as the Detective Corporal and as an Investigator. He has served on the South Suburban Major Crime Task Force, as a Field Training Officer and as a Fire Investigator. Corporal Rzyski has earned numerous awards and citations including: Twenty-two (22) Outstanding Service awards, Six (6) Meritorious Service awards and a Term Award. He was the Department’s Officer of the Year in 2008. He will take command of a Patrol Platoon and will also be in charge of the new officer Field Training program.

Brian has an Associate’s Degree from South Suburban College. His badge will be pinned on him by his wife Nikki. 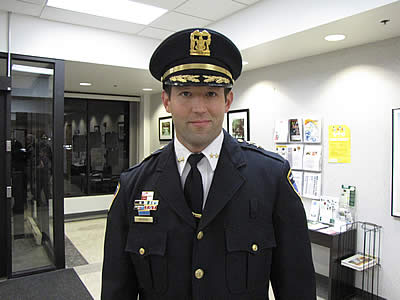 Deputy Chief Christopher Mannino is a 16 year veteran of the Police Department and he has assumed command of the Administrative Division. He has been a Patrol Commander for the past six years and has been in command of the department’s Field Training program. Deputy Chief Mannino is a Firearm’s instructor, a Certified Physical Fitness instructor and has served in the Investigations Division as both the Detective Corporal and as an Investigator. He was also an original member of the Illinois Law Enforcement Alarm System (ILEAS) south team. Deputy Chief Mannino has earned numerous awards and citations including: Nineteen (19) Outstanding Service awards, Three (3) Meritorious Service awards and Three (3) Term Awards. He was the Department’s Officer of the Year in 2003.

Chris has his Bachelor’s Degree from Governors State University and is finishing his Masters Degree. He is a graduate of the 237th class of the FBI National Academy.

His badge will be pinned on him by his father, Vito Mannino, who is the retired Chief of Police for the Village of Richton Park. 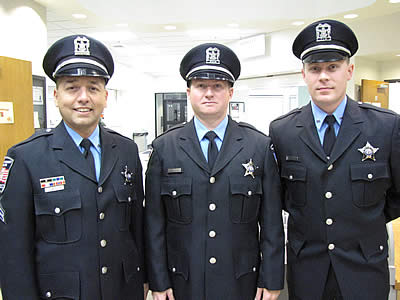