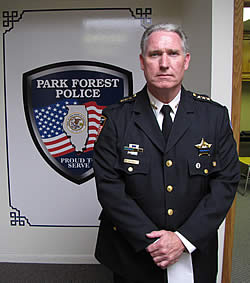 Park Forest, IL–(ENEWSPF)– Police say they found her chained and padlocked to a bed, covered in filth. Barely able to communicate, the 8-year-old girl had been left at home for as much as six hours, her only guardian a 6-year-old boy.

On Saturday, May 1st, the Park Forest police responded to several 9-1-1 calls at a residence in the in the 300 block of Seneca street. The officers found a 6 year old male alone with an 8-year-old female, who was wearing a nylon harness attached to a metal chain that was padlocked to the bed.

The couple charged only had to pay $800 total to leave the courthouse, according to police.

Park Forest Police Chief Thomas Fleming is not happy with the low bail.

“When the officers responded, the patrol officers spoke with a 6-year-old male child at the home, who, through the short conversations, stated that he was afraid and that he was alone,” said Park Forest Police Chief Tom Fleming. “The officer then called out into the house. Getting no response, he wanted to make sure everything was fine and walked through the home. And that’s where he found a 8-year-old female who suffers from some severe mental and physical challenges. “

“The officer noticed that the girl was chained and padlocked, using some type of a harness system, to the bed,” Fleming said.

The 8 year old female, a special needs child, was wearing a diaper that was covered in body waste. The 6-year-old male said the girl was his cousin and his parents were not home, so he called 9-1-1. The officers used bolt cutters to remove the chain and harness.

Both children were taken into protective custody and transported to St. James Hospital for a medical evaluation and later turned over to the Department of Children and Family Services.

The house was found in deplorable conditions, according to police.

“The home is in foreclosure,” Fleming said. “There was a building permit pulled about a year ago. The work has never been completed. The officers found that there was water in only one toilet in the home, no running water.”

Fleming said the Building Department responded to the scene also and took action in reference to the building violations.

Renee Davis, 35, and Paul Coleman, 38, the mother and father of the six year old, were taken into custody later in the day when they came to the police station.

Police say Davis admitted chaining the girl, her adopted daughter, to the bed and leaving her 6-year-old son home alone with the other child so she could run errands. The mother said the girl had wandered away in the past, so she used the harness to keep her nearby. It was estimated she was gone from her home for at least six hours grocery shopping and having lunch in calumet Park and Alsip, according to police.

Davis was charged with two felony counts of criminal neglect of a disabled person on the female child and on misdemeanor count of endangering the life and health of a child for the male child. She was transported to the 6th District Court in Markham for a bond hearing on May 3rd where bond was set at $3,000.00 (10% applies) by Judge James L. Rhodes.

“She had to put up $300,” Fleming said. “We understand that bond isn’t a punishment but only ensures someone’s appearance in court, but are very disturbed that a judge in Cook County would think this crime is so little to only charge a $3,000 bond.”

After further investigation, Coleman was also charged with two felony counts of criminal neglect of a disabled person on the female child and on misdemeanor count of endangering the life and health of a child for the male child along with one count of failing to register as a sex offender. He appeared in Bond court at the 6th District in Markham on May 4th and bond was set at $3,000.00 (10% applies) by Judge Rhodes on the endangerment charges and $2,000.00 (10% applies) on the alleged failure to register as a sex offender.

The police chief said the department is also investigating whether there was any evidence of sexual abuse. He said the 8-year-old girl was transferred from St. James to Northwestern Hospital. She was then taken to Advocate South Suburban Hospital where there is a Sexual Assault Treatment Center.

“They conducted an investigation, and we will be following up with La Rabida, our child advocacy center, in reference to the boy.” Fleming said the 8-year-old girl is not able to communicate well.