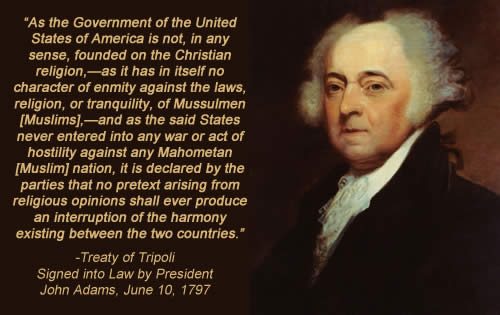 Park Forest, IL-(ENEWSPF)- With all we’ve heard through the years about America being a so-called “Christian nation,” and the more we will hear during the upcoming presidential race, here are some official words on that notion, enshrined in the Treaty of Tripoli, signed into law June 10, 1797 by President John Adams.

“As the Government of the United States of America is not, in any sense, founded on the Christian religion,—as it has in itself no character of enmity against the laws, religion, or tranquility, of Mussulmen [Muslims],—and as the said States never entered into any war or act of hostility against any Mahometan [Muslim] nation, it is declared by the parties that no pretext arising from religious opinions shall ever produce an interruption of the harmony existing between the two countries.”

While the treaty was only law for eight years, it certainly provides insight into the minds of the Founding Fathers with respect to religion and government. The Senators signed it, and no one objected to Article 11.

Read the treaty here. The passage cited above is from Article 11.