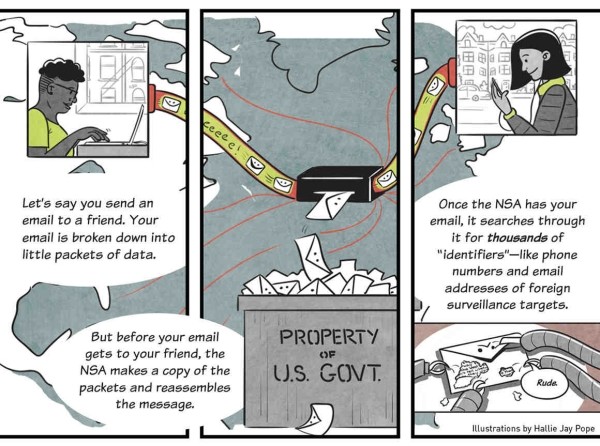 The case was filed by the American Civil Liberties Union in 2015 on behalf of a broad group of organizations. The plaintiffs are the Wikimedia Foundation, The Nation Magazine, Amnesty International USA, PEN America, Human Rights Watch, the Rutherford Institute, the National Association of Criminal Defense Lawyers, Global Fund for Women, and the Washington Office on Latin America. They are represented by the ACLU and the Knight First Amendment Institute at Columbia University.

In October 2015, the district court held that the plaintiffs in the case had not sufficiently shown that their communications were being monitored by the NSA. But all three judges on the three-judge panel of the Fourth Circuit Appeals Court disagreed, finding that Wikimedia has standing to proceed. Two of the judges found that the other plaintiffs lacked standing, although the third judge wrote in a dissent that he would have allowed all nine plaintiffs to move forward in the case.

“This is an important victory for the rule of law. The NSA has secretly spied on Americans’ internet communications for years, but now this surveillance will finally face badly needed scrutiny in our public courts. We look forward to arguing this case on the merits,” said ACLU attorney Patrick Toomey, who argued the appeal in December 2016. “Our government shouldn’t be searching the private communications of innocent people in bulk, examining the contents of Americans’ emails and chats day in and day out. This mass surveillance threatens the foundations of a free internet.”

At issue is the NSA’s “Upstream” surveillance, which the NSA uses to continuously monitor communications on the internet backbone inside the United States — the physical infrastructure that carries Americans’ online messages, emails, and web browsing. The NSA conducts this spying under Section 702 of the Foreign Intelligence Surveillance Act, a controversial statute that the government uses to warrantlessly surveil Americans who communicate with targets located abroad. Section 702 is scheduled to expire at the end of 2017, and the ACLU has called for substantial reforms to the law.

In the course of Upstream surveillance, the NSA copies and combs through vast amounts of internet traffic, which it intercepts inside the United States with the help of major telecommunications companies like Verizon and AT&T. While the government recently suspended one element of this program — so-called “about” collection — it continues to conduct Upstream surveillance. Moreover, it has not disavowed its claimed authority to revive “about” collection in the future.

A previous ACLU lawsuit challenging the NSA’s warrantless wiretapping program, Clapper v. Amnesty, was dismissed by the Supreme Court in February 2013 in a 5–4 vote on the grounds that the plaintiffs could not prove that they had been spied on. Since Clapper was decided, however, documents released by whistleblower Edward Snowden and by the government itself have shown that the government’s surveillance activities go far beyond those that the court described as “speculative” in that case.

“This kind of indiscriminate surveillance has grave implications for individual rights, including the freedoms of speech and association,” said Jameel Jaffer, executive director of the Knight First Amendment Institute at Columbia University. “It’s gratifying that the appeals court has rejected the government’s effort to shield this surveillance from constitutional review.”

More information and all case documents are here: https://www.aclu.org/national-security/wikimedia-v-nsa