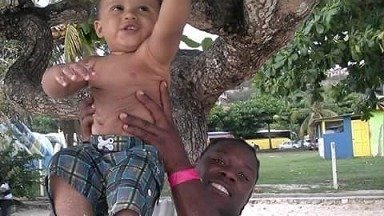 Washington, DC—(ENEWSPF)—July 30, 2015. A coalition of immigrant rights and criminal justice reform advocacy organizations are calling on Immigration and Customs Enforcement’s Office of Chief Counsel to allow green card holder Garfield Kenault Lawrence (A# 045 612 966) who was deported away from his U.S. Citizen wife and child to Jamaica, to reopen his immigration case.

After a year of being held in an immigration detention prison (including during the birth of his first child), Kenault was wrongfully deported in 2013 based on an incorrect legal standard applied by an immigration judge who labeled his two minor 2009 marijuana convictions to be “drug trafficking aggravated felonies.” However, just a few months later, the U.S. Supreme Court ruled in Moncrieffe v. Holder that “characterize[ing] a low-level drug offense as ‘illicit trafficking in a controlled substance,’ and thus an ‘aggravated felony’ . . . defies the ‘commonsense conception’ of these terms.” Despite this clear decision, ICE is refusing to reopen his case so that he can have a proper hearing under the correct law, and is fighting his lawyers’ attempts by claiming that too much time has passed.

“An Immigration Judge got the law wrong and fractured an American family when he ordered Kenault deported. We call on ICE to right this wrong by allowing Kenault to come home and have his day in court,” states Heidi Altman, Legal Director of the Capital Area Immigrant Rights Coalition.

Kenault moved to Virginia from Jamaica in fifth grade and immediately met his future wife Melissa. They started dating in their senior year of high school. He was their high school wrestling champion. He worked as a mover for a company that valued his work ethic and character. Kenault was frequently harassed and profiled by local Virginia police based on being a black immigrant with an accent. After Kenault’s deportation, Melissa has had to work three jobs and receive food stamps. Their son Devario is now three years old and only sees his father through video screens and extremely rare visits to Jamaica. Kenault’s stepmother has cancer and may die without ever seeing him again.

Melissa says, “Kenault made some mistakes when he was young. But since then he’s done everything right – did his jail time, did his probation, worked hard and started a family. Now we’re all paying for his old mistakes again and again, and my son is growing up without his father.”

“The year-long detention and subsequent deportation of Kenault Lawrence is just one example of the millions of families whose lives have been ripped apart by the failed war on drugs,” said Jerónimo Saldaña of the Drug Policy Alliance. “It is beyond reprehensible that a father is torn away from his family over marijuana convictions. We must bring Kenault home and reform our broken criminal justice system so that no other family has to experience the same tragedy.”

Olga Tomchin, Deportation Defense Coordinator and Staff Attorney at the National Day Laborer Organizing Network, explains, “Kenault’s situation is a perfect example of the moral bankruptcy of President Obama’s claim that he is deporting ‘felons not families.’ People with convictions are precious and beloved parts of our families and our communities. While the President commutes sentences of some citizens for drug convictions because “people deserve a second chance,” his administration treats noncitizens with convictions as disposable and fights for their permanent banishment. Particularly as marijuana legalization is advancing across the country, Kenault’s deportation shows clearly the anti-black racism and anti-immigrant prejudice pervasive in the war on drugs.”

Kenault  states, “I have done my time for the crime I committed. I have paid my debt to society with both jail time and probation that monitored my good behavior. Only to be snatched from my home in the middle of the night and eventually sentenced to deportation for the crime of drug trafficking. But the crazy part is… I didn’t traffic any drugs. I was put in a jail cell for more than one year awaiting my immigration trial. I have missed the birth of my first and only child. I have missed my wife every single day. I have to live with the fact that I cannot be there to help support my wife and son financially and emotionally. The worst part is that I have been sent to a place that only immigration calls my “home.” All I want to know is when is enough? When can I come home? ​ I have no anger or ill will. All I want is to live a normal, quiet life. Get up, go to work, and come home to my family every night. Is that too much to ask?”

Organizations supporting Kenault and the Lawrence family include the Capital Area Immigrants’ Rights Coalition, Human Rights Watch, the Drug Policy Alliance, the National Day Laborer Organizing Network, Community Initiatives for Visiting Immigrants in Confinement, and the Immigrant Defense Project. A petition asking ICE to agree to reopen his case has received almost 3,500 signatures and can be found here: https://www.change.org/p/gwen-keyes-fleming-principal-legal-advisor-ice-bring-kenault-home-2.