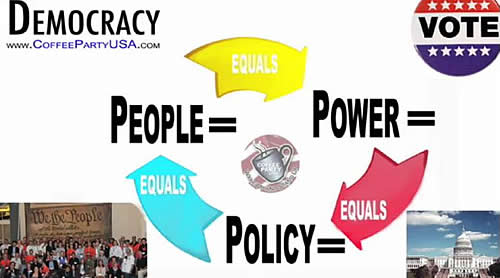 Coffee Party USA aims to put people back in the policy equation. (CoffeePartyUSA.org)

The Coffee Party is a democracy movement that began on Facebook. Organizers Anabel Park and Eric Byler see the Coffee Party as representing "the Other 98%" of Americans who are not the super wealthy, but who deserve more.

And they want America back in the hands of the people.

"These companies have always been able to overpower countries the smaller governments of smaller countries, developing countries, and now they’re so powerful that they’re actually overpowering our own government" Anabel Park says in a video about the Coffee Party’s largest endeavor yet, the "Enough is Enough Rally" at the U.S. Capitol slated for October 29.

"These multi-national companies, without declaring themselves to be a nation-state, have that kind of power," Park says. "We’re the last barrier, the American people, we’re the last barrier to them completely overtaking all governments. That’s why people around the world are trying to get the American people to stand up, to do what’s happening in Spain and Israel and Iceland: to, en masse, stand up, and say, ‘We know what’s going on. We’re not going to let you take our government.’"

Park says the Coffee Party’s focus is the cycle of corruption, the fact that, in this country and many others, money equals power equals policy. 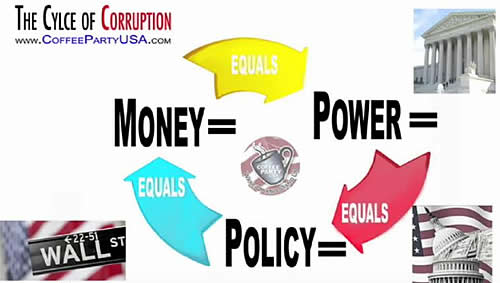 Among the policies that have given corporations such a boost over people include deregulating markets, changing the tax code to favor multinational corporations, which, in turn, becomes more money, shifting the balance of power even more heavily on the side of these corporations, Park says.

"We need to stop the cycle of corruption and to put people back in the process," Park says.

That, she says, is the primary goal of Coffee Party USA.

"We are a non-partisan, fact-based, solutions-oriented network determined to have an impact in our nation’s deliberative process," the organization says on its website. "If we abandon our civic duty to multi-national corporations and the ruling elite, the interests of our nation as a whole will be neglected. Recognizing that many Americans are searching for a way to participate in our political process without adhering to any partisan or ideological framework, our aim is to provide a gathering place and a method for those who might not otherwise have a voice in our democracy. These are the voices we value most."

"We [the people] are being marginalized," Park says. "We have to fix not only campaign finance reform, but also Wall Street reform, and tax code reform. Those are the policies that create more wealth that they can use to affect the political process."

How did multi-national corporations garner such political power? "They created eagle loopholes," Park says, "Citizens United being the biggest one. We have to figure out how to start to close those loopholes." 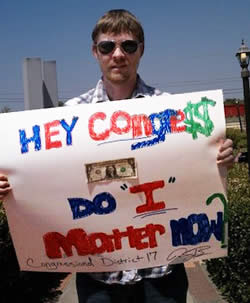 Writing from Waco, Texas, on CoffeePartyUSA.org, former Tea Party organizer Shane Brooks agrees the problem is money in politics, "Money is the on-going enabler of the corruption that plagues the U.S. Congress and our institutions of government. Money empowers and motivates corporate interests that produce and market news/entertainment that exploits social issues and cultural differences, manufactures division, and distracts us from the Cycle of Corruption that enriches them and impoverishes our nation.

Organizer Deb Gates from Oregon tells ENEWSPF she chose Coffee Party "because of Annabel’s desire and commitment to make this the people’s movement. We are a working part of the movement. We are not just on a mailing list where we receive emails asking us for money. In fact, I haven’t yet received ANY emails asking me for money from the Coffee Party. My political affiliation is Democrat. I do not wish to change my party affiliation, and that is another reason why I chose Coffee Party to become politically active in. The organization is not about political party. It is about being an American and joining with other Americans to do what is right for our country."

The group says on its website that billionaire sponsorship is not required, "We have one paid staffer in the Coffee Party and are about to hire a second. The rest of us are volunteers."

To learn more about Coffee Party USA, visit their website or sign up to speak from the platform at the US Capitol on October 29.

The Coffee Party invites you.

The writer is a member of the Coffee Party 2.0 Organizer National Team.