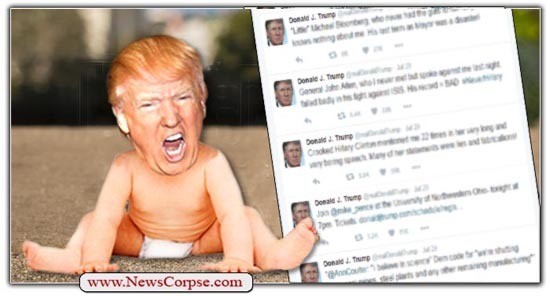 Donald Trump’s war with the media has been one of the most disturbing aspects of the 2016 presidential cycle. While other politicians have wrestled with the press, there has never been the sort of viciousness exhibited by Trump. He calls them liars, sleazy, losers, dummies, and other childish insults. He has revoked the press credentials of outlets that weren’t sufficiently adoring. The Committee to Protect Journalists cited Trump as “an unprecedented threat” to press freedom.

Since Election Day four weeks ago Trump has refused to hold a press conference. That’s longer than any president-elect in forty years. In fact, Trump hasn’t held a press conference since July. And he has plenty of reasons for avoiding the media. Nevertheless, he continues to lash out in ever more ridiculous ways. Take for instance his tweet on Monday:

So Trump is essentially admitting that he only tweets because he isn’t satisfied with the coverage he gets from the media that he is avoiding. That complaint might be taken more seriously if his tweets ever addressed a substantive issue. More often than not they are just self-serving promotions, egotistical bragging, or baseless attacks. And that’s when they aren’t idiotic comments that advance conspiracy theories or risk international crises.

After posting that tweet, the community on Twitter was quick to respond with cogent smack downs. The twitterverse does not sit idly by when confronted with smarmy bullshit. What follows are a few of the choice responses:

.@realDonaldTrump The reason that you think you're being treated unfairly is because the press evaluates you relative to a moral standard

The press is covering you just as you are: a pathetic, spoiled baby who has zero respect among anyone of brains & decency.

You whine more than my two year old cousin. You're humiliating our country.

Don't blame "the press" for your incompetence.

It’s not likely that Trump will entertain the common sense in these replies. He’s too busy avoiding national security briefings and tweeting about how unfunny Saturday Night Live is. Trump’s obsession with the treatment he receives from the press symbolizes the inward focus of our Narcissist-in-Chief. Every president experiences what they regard as harsh reviews, but most do so without becoming such petulant crybabies. Despite his protests, the media is covering him accurately and fairly, for the most part. It’s not their fault he’s such an embarrassment to the nation.