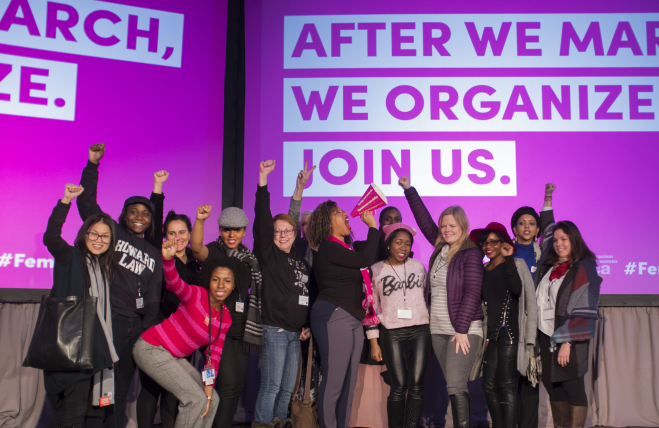 Washington, DC ––(ENEWSPF)–January 23, 2017.   One day after the Women’s March on Washington, activists gathered in Washington, DC, for a day of training and break out sessions to build organizing skills and a network to make change back in their communities. This training provided a venue for participants in the Women’s March on Washington yesterday to work with multiple organizations on policy issues, to gain skills and tools necessary to organize at the grassroots level in their own communities, and to build a network of community leaders across the nation to stay engaged in both local and national efforts.

This training was organized by Planned Parenthood Federation of America, Generation Progress, National Domestic Workers Alliance, The Ms. Foundation for Women, the YWCA USA, and The United State of Women, along with many other partner groups who led breakout sessions and presented.

The event began with a large welcoming plenary, that included remarks from partnering organizations as well as an open discussion on the importance of grassroots organizing and civic engagement. The activists then broke into break out sessions that covered a variety of topics. There were issue-based discussions around reproductive justice, economic justice, and criminal justice reform. And there were training sessions on how to run for office, how to use storytelling, and how best to organize and implement issue campaigns.

“The power and momentum we saw at the march was incredible. Now, we get ready for the next four years — by empowering determined and passionate people of every background, identity, faith, race, and age to get organized, come together, and stand up for our rights and freedoms.”

“This is a moment where we all must come together, across movements, to protect and advance the progress we’ve made. And that’s what we’re doing today. We’re standing shoulder to shoulder with folks of all genders from across the country and globally who advocate for criminal justice reform, education reform, gender justice, LGBTQ rights, reproductive rights, immigrant rights, economic justice, disability rights and more. Together, we’re learning how to organize, network, and mobilize.

Coming out of the training, attendees committed to a week of action from February 18th – 25th dedicated to keeping momentum from the march going with local strategy sessions, visits with Members of Congress, and advocacy.

The Google-supplied ads that appear on this website are not reviewed ahead of time and differ for each visitor. If anything offensive, inappropriate, or otherwise unwholesome appears, please notify us so we can take steps to block that specific advertiser. Email the URL or advertiser name to [email protected]om.