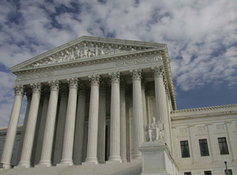 Washington, DC–(ENEWSPF)–June 29, 2012.  The Supreme Court virtually guaranteed that it will be an issue in the upcoming presidential election by upholding both the key provision of President Obama’s health care law and the key provision of Arizona’s anti-immigrant law in a busy last week to the 2011 Term.

“The Supreme Court may have ended its Term, but it is a safe bet that the political debate over its role and its rulings has just begun,” said Steven R. Shapiro, the ACLU’s national legal director.

The decision in the health care case, National Federation of Independent Business v. Sebelius, was perhaps more anxiously awaited than any decision by the Supreme Court since Bush v. Gore. Defying many post-argument predictions, Chief Justice Roberts held that Congress had not exceeded its constitutional authority when it enacted the so-called individual mandate, requiring everyone either to purchase health insurance or make an additional payment on their federal taxes. Unfortunately, the Court’s decision does make it easier for states to reject federal dollars intended to extend Medicaid coverage.

“We welcome the Court’s decision, although we are disappointed by the Medicaid ruling,” Shapiro said. “Health care is a national problem and the national government must be empowered to address it. It would have been a major step backward for the Court to rule otherwise.”

The Court also reaffirmed the ultimate authority of the federal government to regulate immigration in Arizona v. United States when it struck down 3 provisions of Arizona’s S.B. 1070 on the theory that they were inconsistent with federal law. Significantly, however, the one challenged provision of S.B. 1070 that the Court did not strike down was the “show-me-your-papers” provision that has generated so much attention and controversy. The Court acknowledged that the provision raised legitimate concerns about racial profiling and detention but chose not to address them pending the outcome of further litigation.

“S.B. 1070 reeks of racial discrimination,” Shapiro said. “The Court’s unwillingness to confront that reality in this decision is disappointing and will have real human consequences. At the same time, the Court correctly anticipated that the discrimination issue can and will be litigated in other cases, including ongoing litigation brought by the ACLU and other civil rights groups.”

Indeed, the ACLU announced this week that it had amassed a war chest of almost $9 million to fight discriminatory immigration laws at the state and local level throughout the country.

In another major decision issued at the end of the Term, the Court ruled that the Stolen Valor Act violates the First Amendment. The Act makes it a federal crime to lie about receiving military honors. Justice Kennedy’s plurality opinion emphatically rejected the government’s contention that false statements of fact are categorically unprotected by the First Amendment. “The remedy for speech that is false is speech that is true,” he wrote. “This is the ordinary course in a free society.”

Some other major rulings that were expected this year fizzled out for one reason or another. In FCC v. Fox Television, the Court declined to decide the constitutionality of the FCC’s indecency rules for radio and television, holding instead that CBS and Fox Television could not be penalized for violating a ban on “fleeting expletives” that was not announced until after their shows were broadcast. In Magner v. Gallagher, the Court granted review to decide whether the anti-discrimination provisions of the Fair Housing Act require proof of discriminatory intent or merely discriminatory impact, but the case was dismissed prior to argument. And, in Kiobel v. Royal Dutch Petroleum, the Court heard argument on the question of whether corporations can be sued for human rights abuses under the Alien Tort Statute, but instead of resolving that question the Court scheduled the case for reargument next Term to decide whether the Alien Tort Statute applies at all to human rights abuses committed abroad.

The Court did issue a number of important decisions this Term recognizing the rights of criminal defendants. In Jackson v. Hobbs and Miller v. Alabama, the Court held that juveniles convicted of murder cannot be subject to a mandatory sentence of life imprisonment without the possibility of parole. Before condemning a child to die in prison, the Court said, a sentencing judge must be allowed to take the defendant’s youth into consideration. The Court also expressed its view that such sentences should be “uncommon.”

In United States v. Jones, the Court held that the placement of a GPS device on a suspect’s car constitutes a search under the Fourth Amendment. In Missouri v. Frye and Lafler v. Cooper, the Court held that the Sixth Amendment right to effective assistance of counsel applies at the plea bargaining stage. In Maples v. Thomas, the Court reinstated the habeas corpus petition of a death row inmate, excusing his late filing on the ground that he had been effectively abandoned by his lawyers. In Dorsey v. United States, the Court ruled that the Fair Sentencing Act, which substantially reduced the disparity in federal sentences between crack and powder cocaine, applied to anyone sentenced after the law went into effect, regardless of when the crime was committed.

Looking ahead to next Term, he Court has already granted review in Fisher v. University of Texas, an important affirmative action case involving university admissions. Petitions for certiorari are expected soon from lower court decisions striking down Proposition 8, which banned same-sex marriage in California, and the Defense of Marriage Act, which excludes same-sex couples from federal marriage benefits. It is also highly likely that the Court will be asked to review the preclearance provisions contained in Section 5 of the Voting Rights, thrusting the Court into the national debate over voter suppression.

“Controversy has a way of finding the Court,” Shapiro said, “and next Term is shaping up to be another blockbuster year.”

A summary of all the Court’s major civil liberties cases from this Term is online at:
www.aclu.org/organization-news-and-highlights/aclu-summary-2011-supreme-…