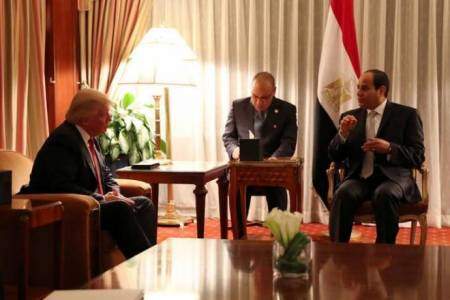 Visit Comes at Nadir for Basic Freedoms in Egypt

Washington, DC –(ENEWSPF)–April 2, 2017.  Egyptian President Abdel Fattah al-Sisi’s scheduled meeting with United States President Donald Trump on April 3, 2017, comes at a time when human rights are at a nadir in Egypt and under threat in the US, Human Rights Watch said today.

Al-Sisi’s meeting with Trump is the first visit by an Egyptian head of state to the White House since 2009. Al-Sisi, as defense minister, overthrew the country’s first freely elected president, Mohamed Morsy, in July 2013, and oversaw the brutal dispersal of opposition protests that left more than 1,150 people dead in the following weeks. Under al-Sisi’s presidency, his security forces have arrested tens of thousands of Egyptians and committed flagrant rights abuses, including torture, enforced disappearances, and likely extrajudicial executions.

“Inviting al-Sisi for an official visit to Washington as tens of thousands of Egyptians rot in jail and when torture is again the order of the day is a strange way to build a stable strategic relationship,” said Sarah Margon, Washington director at Human Rights Watch.

Al-Sisi, who was elected in May 2014, has presided over near-total impunity for abuses by the military and security forces and the severe restrictions on civil and political rights, effectively erasing the gains of the 2011 uprising that ousted the longtime ruler Hosni Mubarak.

After meeting al-Sisi during his visit to the United Nations General Assembly in September 2016, Trump, then a presidential candidate, released a statement declaring his “strong support for Egypt’s war on terrorism, and how under a Trump Administration, the United States of America will be a loyal friend, not simply an ally, that Egypt can count on in the days and years ahead.”

Since signing a peace treaty with Israel in 1979, Egypt has received numerous benefits from its alliance with the US, including US$1.3 billion in annual military aid since 1987, receipt of excess US military equipment, special military training, and the right to buy equipment on credit – an arrangement known as “cash flow financing” that was provided, until recently, only to Egypt and Israel.

After the military coup in 2013, the US limited several government-to-government assistance programs. But it was not until after security forces killed an estimated 817 people while dispersing a sit-in opposing Morsy’s removal in Cairo’s Rab’a al-Adawiya Square on August 14, 2013, that the administration undertook a review of military aid to Cairo and temporarily suspended the delivery of major weapons systems. The delivery of F-16 aircraft, Harpoon missiles, and M1A1 Abrams tank kits resumed in 2015, and in February 2017, the US said it would restart a biennial military training exercise. US military cooperation with Egypt never ceased, and no government official or member of the security forces has been held accountable for the mass killings.

Since 2012, Congress has conditioned military aid to Egypt on taking various steps toward supporting human rights and a democratic transition to civilian government. But in every year but one, Congress has allowed the secretary of state to waive those restrictions based on US national security interests.

Since Morsy’s removal, Egyptian security forces have arrested at least 41,000 and possibly as many as 60,000 people, according to local human rights groups. Security forces arbitrarily detained many under accusations that they were members or sympathizers of the Muslim Brotherhood, the movement to which Morsy belonged. Courts have sentenced thousands for violating a 2013 law that effectively bans opposition protests, including leftists and other non-Islamist activists in addition to alleged Muslim Brotherhood supporters.

Among those currently detained is Aya Hijazi, an Egyptian-American citizen who founded the Belady Foundation for Street Children, and whose trial on allegations of human trafficking and using children in street protests has been marked by serious due process violations, including her groundless detention since May 2014.

Egypt’s counterterrorism efforts in the Sinai Peninsula have been fraught with gross abuses. In North Sinai, where an affiliate of the extremist group Islamic State (also known as ISIS) has established a presence, Egyptian military and Interior Ministry forces have committed torture, enforced disappearances, and likely extrajudicial killings. Military air and artillery strikes have killed scores of civilians. Between 2013 and 2015, the military wiped most of the border town of Rafah off the map under the justification of eliminating smuggling tunnels that benefited ISIS, forcing thousands of families to relocate while violating their rights to forewarning and proper compensation. Yet ISIS has continued to operate even in towns ostensibly under government control. The extremist group has killed dozens of civilians it views as government collaborators and singled out Christians for attacks and threats, driving hundreds of Christian families to flee.

Both the Sisi administration and the Egyptian parliament have taken steps to cripple the human rights organizations that document rights violations and provide assistance to abuse victims. In February 2017, security forces physically shut the offices of the 23-year-old Nadeem Center for the Rehabilitation of Victims of Violence and Torture, one of several dozen human rights organizations targeted in a years-long criminal investigation based on allegations that the groups illegally received foreign funding. Under a vaguely worded amendment to the penal code al-Sisi issued by decree in 2014, anyone who receives foreign funding “with the aim of pursuing acts harmful to national interests or destabilizing the general peace or the country’s independence and its unity” could face 25 years in prison. At least 20 prominent human rights defenders have been banned from leaving Egypt, and the assets of many rights defenders have been frozen. Such criminalization of foreign funding to nongovernmental human rights organizations contravenes the International Covenant on Civil and Political Rights (ICCPR).

In November, parliament drafted a new civil society law behind closed doors that would prohibit independent nongovernmental organizations from operating in the country by requiring that a group’s work “agree with the state’s plan, development needs and priorities.” The law criminalized a host of broadly worded activities, including conducting public surveys or field research without government approval, or conducting any work “of a political nature.” Parliament approved the law following just two days of debate but never sent it to al-Sisi for approval following widespread international criticism.

In 2015, US President Barack Obama announced that the US would resume, in the interest of national security, the delivery of major military equipment that it had placed on hold after the Rab’a massacre. But the Obama administration also announced the end of cash flow financing and introduced specific categories to guide how Egypt could use its military aid, which was not reduced.

In fiscal year 2015, Congress conditioned significant funds to Egypt, including military aid, on democracy and human rights progress. But Secretary of State John Kerry used a national security waiver to bypass those conditions. In fiscal year 2016, Congress conditioned 15 percent of military aid until the secretary of state certified progress on democracy and human rights. A national security waiver was also provided, but neither the certification nor the waiver has been exercised. Congress has not yet passed a funding bill specifying Egypt’s aid for fiscal year 2017.

Both the Sisi and Trump administrations apparently want to expand cooperation, especially on counterterrorism, despite these serious and ongoing abuses. In response, the US Congress should maintain, at a minimum, the restrictions on security assistance from previous years unless there is serious and measurable progress on human rights, such as dropping the investigation into nongovernmental organizations, repealing the law banning protests, and beginning a review of the cases of those detained arbitrarily and sentenced solely for peacefully exercising their civil or political rights. Congress should ensure that the Trump administration cannot waive these restrictions.

“Giving more money to the Sisi government is to the detriment of US and Egyptian interests,” Margon said. “Neither side in this relationship seems interested in promoting human rights, but the gross abuses being committed by Egyptian authorities should compel Congress to keep limiting support.”