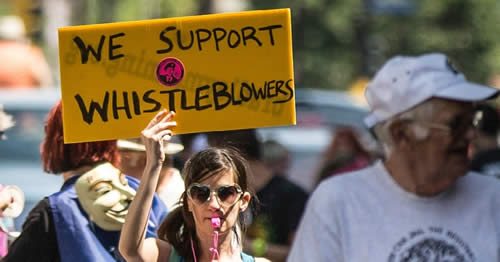 US officials have concluded there is a new person leaking classified documents, CNN has reported. (Photo: Tony Webster)

The news comes the same as day as new reporting by Jeremy Scahill and Ryan Devereaux for The Intercept revealed that many of those on the government’s terrorist watchlist have no terrorist group affiliation. Their reporting cites documents dated 2013 leaked by a "source within the intelligence community."

Scahill and Devereaux also reported roughly two weeks ago on the National Counterterrorism Center’s secret guidebook for how it adds names to and manages its terrorism database. That reporting said the document was leaked to The Intercept by "a source within the intelligence community” as well.

Glenn Greenwald, a founding editor of The Intercept and the Pulitzer Prize-winning journalist who broke the story of vast NSA spying based on documents leaked by Edward Snowden, told CNN in February, "I definitely think it’s fair to say that there are people who have been inspired by Edward Snowden’s courage and by the great good and virtue that it has achieved."

"I have no doubt there will be other sources inside the government who see extreme wrongdoing who are inspired by Edward Snowden," Greenwald said.

This work is licensed under a Creative Commons Attribution-Share Alike 3.0 License