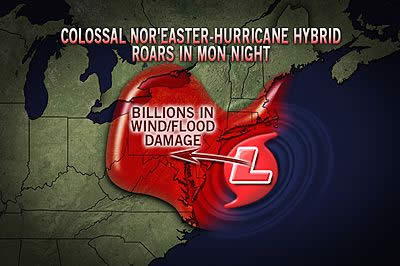 State College, PA-(ENEWSPF)- AccuWeather.com reports an extremely rare and dangerous storm, "Sandy," is moving in from the Atlantic. Inundations have already occurred and will get worse into Monday night.

According to Expert Senior Meteorologist Steve Wistar, "Sandy is unfolding as the Northeast’s Katrina in terms of impact."

Sandy will affect 60 million people in its path and could lead to billions of dollars in damage.

Hurricane Sandy is forecast by AccuWeather.com to slam into New Jersey between 5:00 and 6:00 p.m. Monday, between Atlantic City and Wildwood. Sandy made the left turn as projected early Monday morning and is barreling toward the Garden State at 28 mph as a 90-mph hurricane.

Coastal inundation and damaging wind will continue and will get worse in the New Jersey and the New York metropolitan area into Monday night.

According to AccuWeather.com CEO Barry Myers, "Sandy is a hurricane wrapped in a winter storm."

The barrier islands of New Jersey to New York City, including tidal river areas may experience their worst storm surge flooding in modern times with Sandy rolling ashore around high tide Monday evening packing the punch of a powerful hurricane.

However, damaging and life-threatening impact from the giant, powerful storm will reach as far inland as the central Appalachians and will span the coast from North Carolina to southern New England.

Conditions will deteriorate through the day Monday with the worst of the storm spreading inland Monday night into Tuesday.

Sandy will weaken over land at midweek, but conditions will remain adverse throughout the Northeast, eastern Great Lakes and upper Ohio Valley.

Ripple-effect flight delays and cancellations have occurred over a large part of the nation, as the storm is targeting major airports from Boston to Washington, D.C., with New York and Philadelphia in the middle. Many aircraft originate from or travel to these hubs on a daily basis.

Impacts from heavy rain and wind will be felt hundreds of miles inland and the power in some neighborhoods could be out for days. 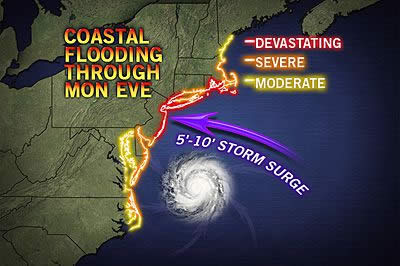 Storm surge flooding will occur over a much larger area, when compared to a hurricane and more severe than a typical nor’easter.

Sandy has the potential to bring historic storm surge flooding near and north of the center.

There is the potential from the central New Jersey coast to New York City and western Long Island have some of their worst coastal flooding on record with Sandy tracking into New Jersey.

Communities, neighborhoods, roads, rail yards, subway stations and other low-lying areas near the coast, generally north of the track can take on feet of salt water.

AccuWeather.com meteorologists are expecting a storm surge of 5 to 10 feet, but locally higher levels are possible near and just north of the storm track. Local effects could push the storm surge to between 12 and 15 feet in some places.

The full moon during the afternoon of Monday, Oct. 29, will add to high tide levels spanning the through the 30th.

Near-coast waves will average 12 to 20 feet, while seas well offshore will range from 30 to 40 feet. 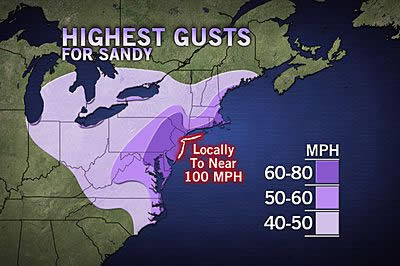 Sandy will not be your typical hurricane when it moves in from the southeast. Hurricanes are small and compact. Damaging wind gusts will reach from Boston to Washington, D.C., and inland to the central Appalachians.

Sandy will be more like a large nor’easter on steroids. It could have the impact of a Category 2 hurricane, despite the absence of hurricane watches or warnings issued by the National Hurricane Center for the area.

Peak gusts near the coast just before, during and just after landfall can top 80 mph.

Tropical storm wind gusts extend out hundreds of miles from the center, so focusing on the center alone in terms of the severity for wind and rain is not recommended.

An extended period of wind gusts between 40 and 60 mph is forecast for two days, which will take its toll on structures, trees and power lines.

There is the potential for tens of thousands of trees to be downed and millions of utility customers could be without power at some point.

Flying debris, including airborne panes of glass in the larger cities will pose a danger.

Some secondary roads could be blocked by trees. Depending on the landscape, such as heavily wooded areas, the power could be out for a week or more. 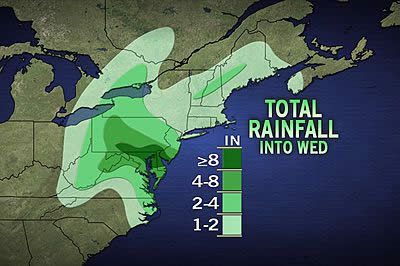 Flash, urban and small steam flooding from rainfall will also be a significant impact. Sandy has the potential to bring over a half of a foot of rain to some areas on its west, northwest and north flanks.

Fallen leaves will block storm drains in some towns and cities. Small streams will immediately rise in response to the rainfall.

While most major rivers either will not receive enough rain to cause flooding, the Potomac River will be significantly impacted by heavy rain. Major flooding is possible along the Potomac during the middle and latter part of this week.

Enough cold air will wrap into Sandy’s far western side to bring heavy, wet snow to the mountains from northern North Carolina to southwestern Pennsylvania Monday into Wednesday. It is possible that snow zone extends northward to extreme western New York.

Snowfall should top a foot in the higher terrain of West Virginia.

Central and northern New England will be spared the worst of the storm due to the forecast track well to the south. However, there will be problems with strong wind gusts, heavy rain, coastal flooding and beach erosion due to the expanse of the storm. These conditions will trend more serious heading west along the South coast.

Eastern North Carolina will be spared the worst as well with the storm making landfall over New Jersey. Strong, gusty winds can cause power outages and back bay flooding during and in the wake of the storm for a time.