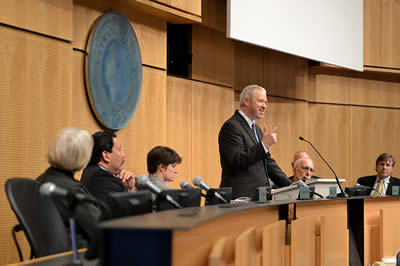 Seattle Mayor Mike McGinn called for legalization of marijuana in his 2012 State of the City Address. (Photo: Seattle.gov)

The following is from the mayor’s prepared remarks (emphasis added):

It is time we were honest about the problems we face with the drug trade. Drugs are a source of criminal profit, and that has led to shootings and even murders. Just like we learned in the 1920s with the prohibition of alcohol, prohibition of marijuana is fueling violent activity. We also know today that the drug war fuels a biased incarceration policy. The drug war’s victims are predominantly young men of color.

Seattle is the kind of place that isn’t afraid to try a different approach. We support safe access to medical marijuana and made enforcement of possession of marijuana for personal purposes our lowest enforcement priority. But we’ve learned in the past year that with the federal war on drugs still intact, and with our kids still getting gunned down on the streets, we need to do more.

I know every one of the city council members sitting to my left and right believe as I do: it’s time for this state to legalize marijuana, and stop the violence, stop the incarceration, stop the erosion of civil liberties, and urge the federal government to stop the failed war on drugs.