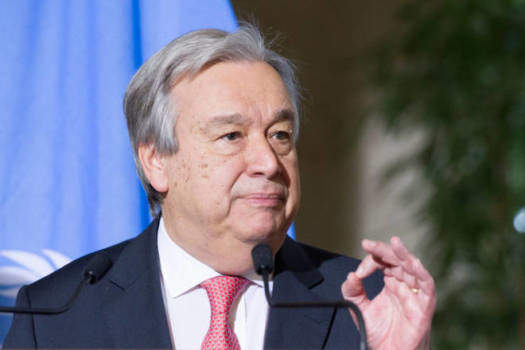 “I continue to follow the situation in Syria closely and with grave concern,” said Mr. Guterres in a statement.

According to the US, the launch of 59 Tomahawk cruise missiles into the Shayrat Airbase was a response to what it states was the Syrian Government’s use of chemical weapons from the base. The alleged 4 April chemical weapons attack killed many civilians in the Khan Shaykhun area of Idlib.

Decrying the ‘abhorrent’ chemical weapons attack, the UN chief stressed the need for accountability for such crimes in line with existing international norms and Security Council resolutions.

In the wake of the reported US airstrikes, Mr. Guterres said: “Mindful of the risk of escalation, I appeal for restraint to avoid any acts that could deepen the suffering of the Syrian people.”

“These events underscore my belief that there is no other way to solve the conflict than through a political solution,” he said, calling on the parties to urgently renew their commitment to making progress in the Geneva [intra-Syrian talks].

Meanwhile, the Security Council convened an urgent session to hear an update on the situation in Syria.

UN Under-Secretary-General for Political Affairs Jeffrey Feltman said that the 30 December 2016 Syrian ceasefire – brokered by Russia, Iran and Turkey – had faltered in the last two months amid a steady escalation of military activity.

He said that in mid-February, Government forces escalated their military operations in several areas of Damascus and Homs, recapturing Wadi Barada and al-Waar in Homs.

On 4 April, as Government forces were fighting to regain territory recently lost to opposition offensives in northern Hama, disturbing reports emerged of an alleged chemical attack, in nearby Khan Shaykhoun in southern Idlib, Mr. Feltman said, adding that the Organisation for the Prohibition of Chemical Weapons (OPCW) has announced that its fact-finding mission is starting to investigate the alleged attack.

A statement from the Syrian General Command of the Army and the Armed Forces called the US response a “blatant act of aggression” which had caused six deaths and huge material damage.

Mr. Feltman said that Iran and Russia condemned the US attack, with the United Kingdom, Australia, Germany, Turkey, Saudi Arabia, Italy, Japan, the Netherlands and New Zealand expressing some support for the US strikes.

The Security Council has the primary responsibility for international peace and security, he said, urging the 15-member body to unite and exercise that responsibility to investigate the alleged use of chemical weapons in Khan Shaykhun.

Security Council resolution 2254 (2015) and the 2012 Geneva Communiqué remain the foundation of, and contain the core principles for, United Nations mediation efforts and ultimately a solution in this regard, he said.