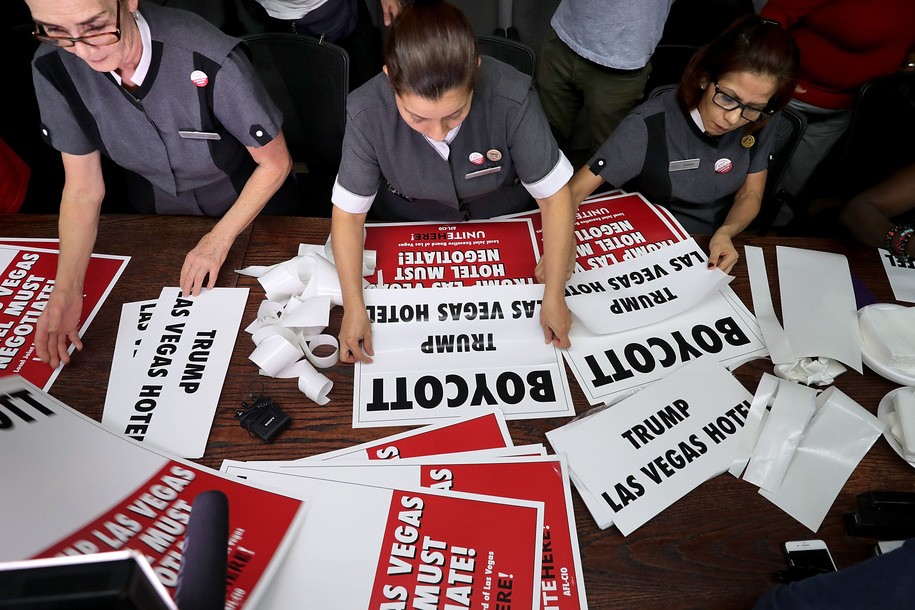 It’s time for Donald Trump and his company to sit down and bargain with workers at the Trump International Las Vegas Hotel, the National Labor Relations Board has ordered. The workers unionized late last year, but Trump’s company has fought that and refused to negotiate a first contract. Now the NLRB has said that refusal is illegal:

We find that the Respondent’s conduct constitutes an unlawful failure and refusal to recognize and bargain with the Union.

Trump is ordered to cease and desist from “failing and refusing to recognize and bargain with Local Joint Executive Board of Las Vegas, affiliated with UNITE HERE International Union” and from “interfering with, restraining, or coercing employees” exercising their legal rights, as well as to post and distribute a notice promising to abide by the ruling.

Geoconda Arguello-Kline, secretary-treasurer of the Culinary Union, drew a connection between Trump’s response to his workers voting to unionize and Trump’s take on the presidential election, saying “The National Labor Relations Board has consistently told Donald Trump and his company that the union election wasn’t rigged and that he must sit down and negotiate with the Culinary Union.” As of now, Arguello-Kline continued, “Mr. Trump is breaking federal law and Trump Hotel Las Vegas is operating illegally. Mr. Trump should accept the federal government’s order to negotiate and treat his workers with respect.”