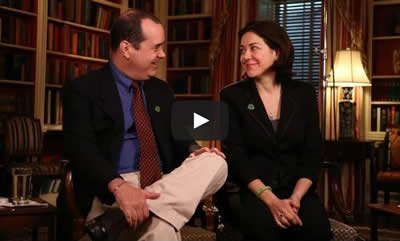 Francine Wheeler and her husband. (PHOTO FROM VIDEO)

Washington, D.C.-(ENEWSPF)- An incredibly moving address from the mother of Ben Wheeler, murdered at Newtown, Connecticut.

This week’s address is delivered by Francine Wheeler, whose six year old son, Ben, was murdered alongside nineteen other children and six educators in Newtown, Connecticut, four months ago. Now, Francine — joined by her husband David — is asking the American people to help prevent this type of tragedy from happening to more families like hers.

Hi. As you’ve probably noticed, I’m not the President. I’m just a citizen. And as a citizen, I’m here at the White House today because I want to make a difference and I hope you will join me.

My name is Francine Wheeler. My husband David is with me. We live in Sandy Hook, Connecticut.

David and I have two sons. Our older son Nate, soon to be 10 years old, is a fourth grader at Sandy Hook Elementary School. Our younger son, Ben, age six, was murdered in his first-grade classroom on December 14th, exactly 4 months ago this weekend.

David and I lost our beloved son, but Nate lost his best friend. On what turned out to be the last morning of his life, Ben told me, quite out of the blue, “ I still want to be an architect, Mama, but I also want to be a paleontologist, because that’s what Nate is going to be and I want to do everything Nate does.”

Ben’s love of fun and his excitement at the wonders of life were unmatched His boundless energy kept him running across the soccer field long after the game was over. He couldn’t wait to get to school every morning. He sang with perfect pitch and had just played at his third piano recital. Irrepressibly bright and spirited, Ben experienced life at full tilt.

Until that morning. 20 of our children, and 6 of our educators – gone. Out of the blue.

I’ve heard people say that the tidal wave of anguish our country felt on 12/14 has receded. But not for us. To us, it feels as if it happened just yesterday. And in the four months since we lost our loved ones, thousands of other Americans have died at the end of a gun. Thousands of other families across the United States are also drowning in our grief.

Please help us do something before our tragedy becomes your tragedy.

Sometimes, I close my eyes and all I can remember is that awful day waiting at the Sandy Hook Volunteer Firehouse for the boy who would never come home – the same firehouse that was home to Ben’s Tiger Scout Den 6. But other times, I feel Ben’s presence filling me with courage for what I have to do – for him and all the others taken from us so violently and too soon.

We have to convince the Senate to come together and pass commonsense gun responsibility reforms that will make our communities safer and prevent more tragedies like the one we never thought would happen to us.

When I packed for Washington on Monday, it looked like the Senate might not act at all. Then, after the President spoke in Hartford, and a dozen of us met with Senators to share our stories, more than two-thirds of the Senate voted to move forward.

But that’s only the start. They haven’t yet passed any bills that will help keep guns out of the hands of dangerous people. And a lot of people are fighting to make sure they never do.

Now is the time to act. Please join us. You can talk to your Senator, too. Or visit WhiteHouse.gov to find out how you can join the President and get involved.

Help this be the moment when real change begins. From the bottom of my heart, thank you.