Washington, D.C.-(ENEWSPF)- There were a ton of photos snapped of first lady Michelle Obama’s visit to the U.S. Open in New York today. But here’s the one the Drudge Report chose to go with to accompany its caption of "Tennis, Anyone?" 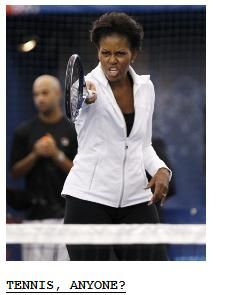 Michelle Obama as the angry, black female — and this time with what could be considered a weapon. Where have we seen that before?

During the 2008 presidential campaign, this is the image the right-wing media tried to cultivate of Michelle Obama, painting her as someone who "sometimes uses" a "kind of militant anger." Bill O’Reilly accused her of looking "like an angry woman," and Sean Hannity said that she "sounds angry." John McLaughlin asked of her: "You don’t think she’s a black militant?"

Obama was at the U.S. Open in part to promote her "Let’s Move!" campaign, which is aimed at reducing childhood obesity. The article to which the Drudge Report linked made that clear:

Obama spoke to a group of local youngsters Friday as part of her campaign against childhood obesity.

"I’m not really good or anything like that. That’s the beauty of tennis," she said. "You don’t have to be good to enjoy it. I love the game, and my skills are very questionable."

Obama then joined the kids in a tennis video game, table tennis and other activities at an indoor facility at Flushing Meadows designed to get young players excited about the sport.

Drudge previously attacked Obama over the campaign, hyping a story that suggested a link between promoting childhood health and an increase in pedestrian deaths. The story turned out to be false.

A five-minute spin through the Drudge Report these days is a paranoid journey through a world where Michelle Obama is always downing junk food on the same day she talk against obesity, where Al Gore is always fat, where conferences on global warming are always cancelled by blizzards, and where most of his conservative readers think the name of the Homeland Security secretary isn’t "Janet Napolitano" but "Big Sis."

Of all those things, the non-stop hectoring of the First Lady is most emblematic of what Drudge has become since the moment in 2008 when it dawned on people that America was electing a president with Clinton’s center-left politics who happened to be black. Since then, Drudge has failed to miss an opportunity to not only remind his readers of the president’s skin color but to link Barack or Michelle Obama to rap artists or to crimes committed by black perps in his hometown … to using his talent in jumbling links to intersperse stories about bad poll numbers for the president or going after the President’s bid to bring the OIympics to the U.S. by hyping random murders in Chicago’s inner city.