Washington, D.C.-(ENEWSPF)- Right-wing bloggers misled by dishonest Fox News video editing are attacking Teamsters President James Hoffa, Jr. for supposedly urging violence against Tea Party activists during a Labor Day speech. Conservatives are also attacking President Obama, who appeared at the event, for "sanctioning violence against fellow Americans" by failing to denounce Hoffa. But fuller context included in other Fox segments makes clear that Hoffa wasn’t calling for violence but was actually urging the crowd to vote out Republican members of Congress.

During the segment that the bloggers have latched onto, Fox edited out the bolded portion of Hoffa’s comments:

HOFFA: Everybody here’s got to vote. If we go back and keep the eye on the prize, let’s take these son of a bitches out and give America back to America where we belong! Thank you very much!

In an initial report on Hoffa’s speech at 1 p.m. on Fox News, Ed Henry reported that Hoffa said that "we’ll remember in November who’s with the working people" and "said of the Tea Party and of Republicans, ‘let’s take these sons of bitches out.’"

Henry made clear during that segment that Hoffa’s comments were references to voting out Republican members of Congress, not to violence. And roughly 20 minutes later, he explained on Twitter that the "full quote" of the "take these son of a bitches out" comment is "Everybody here’s got to vote. If we go back & keep the eye on the prize, let’s take these sons of bitches out":

But in a second segment that ran at roughly the same time as Henry’s tweet, Fox News dishonestly edited the speech in the manner seen above. Andrew Breitbart’s Big sites, Real Clear Politics, The Daily Caller, the Media Research Center, and the Drudge Report have all highlighted that footage, using it to condemn "the violence emanating from union thug bosses" and demand that Obama "denounce" the comments.

In the Fox News segment that included the dishonestly cropped video, Republican consultant Brad Blakeman decried the comments as "thuggery at its best" and "the kind of remarks you’d expect out of Tony Soprano," and commented that "when a union president says ‘let’s take these sons of bitches out,’ that usually means someone’s legs are going to get broken, somebody’s going to disappear." Meanwhile, anchor Megyn Kelly somehow did not mention Henry’s previous explanation that the comments were references to voting Republicans out of office.

Andrew Breitbart operative and CNN contributor Dana Loesch quickly followed up the attack on Twitter, claiming soon after the Fox segment and Henry tweet that Hoffa "threatens tea party voters" and that if Obama "doesn’t condemn then he is sanctioning violence against fellow Americans by silence": 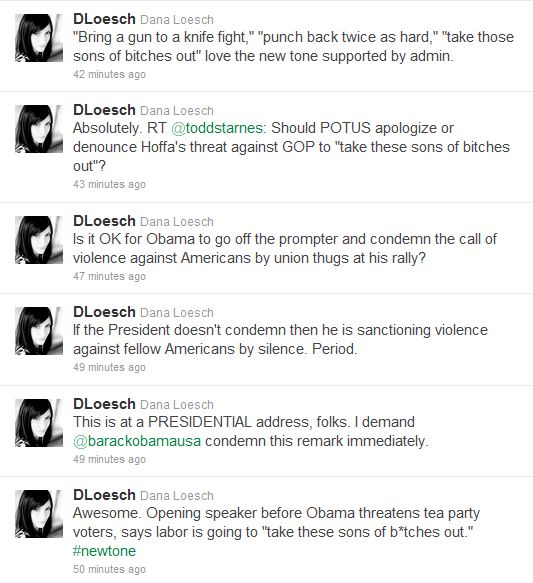 Breitbart’s websites also jumped onboard, circulating the cropped Fox News video of the Hoffa speech and describing it as a "threat of violence." Other right-wing media outlets soon followed.

Loesch’s comments in particular were already way over the top. But they became truly embarrassing at around 3 p.m., when the whole story collapsed after Fox finally got around to airing what Henry had called the "full quote" of Hoffa’s "take these son of a bitches out" comment:

As Henry noted, Hoffa was actually referencing "what he thinks unions are going to do to take Republicans out of office." We’ll see if that puts a stop to the ongoing right-wing freakout over the comments.

UPDATE: Hours after Fox News aired the full context of the "take these son of a bitches out" comment, the network reverted to form. In the first segment on The Five, Fox again aired a dishonestly edited version of Hoffa’s remarks that cropped out his references to voting. Watch: