Washington, D.C.–(ENEWSPF)– On her February 12 program, MSNBC host Rachel Maddow responded to Glenn Beck’s claim that "nobody’s saying" the Washington, D.C. snowstorm disproves climate change by noting that Beck himself previously forwarded such a suggestion. In response, Beck accused Maddow of selectively editing his remarks — by airing a clip of her show, but editing out the portion where she aired his own comments in which he used the Washington, D.C. snowstorm to cast doubt on climate change science.

During the February 10 broadcast of his radio program, Beck cast doubt on climate change science by stating of D.C.’s snow storm: "I believe God is just saying, ‘I got your global warming here, eh? You want a piece of global warming?’"

On the February 10 edition of The Rachel Maddow Show, scientist and television personality Bill Nye noted that conservatives are "claiming that the snow in Washington disproves climate change." On his February 12 radio program, Beck responded by falsely asserting: "Nobody’s saying that … who has claimed that this snow storm is proof that global warming doesn’t exist?  How many times have I said, both for hurricanes and no hurricane, this doesn’t — one storm, one storm does not prove anything. It’s a trend."

On her February 12 program, Maddow responded to Beck’s radio remarks that "nobody’s saying" snow in D.C. disproves climate change by stating: "Who’s claimed that? Dude, you have. A lot." She then aired his February 10 remarks. From a MSNBC.com transcript of Maddow’s program:

BECK: Well, the snow is hammering Washington, D.C. again. I believe God is just saying, "I got your global warming here, eh?  You want a piece of global warming?"

MADDOW: Same radio show. Same guy and it’s not like that was a one-off occurrence.

BECK [February 10 edition of Fox News’ Glenn Beck]: I don’t think it takes a genius to see through the "more snow is proof of global warming" claim.

SEAN HANNITY, HOST, "HANNITY": It’s the most severe winter storm in years, which would seem to contradict Al Gore’s hysterical global warming theories. Rumor has it that another storm could be headed this way next week. Global warming, where are you? We want you back.

MADDOW: Who has claimed that the snowstorm is proof that global warming doesn’t exist? Who has claimed that?  It is one thing to be totally outrageously wrong about facts in science. But the price of that is getting made fun of for it and getting called out on it by, boom, Bill Nye the Science Guy.

Feb. 16: Beck responds by accusing Maddow of "selective editing" — by editing out her evidence

Beck accuses Maddow of "selective editing." In a February 16 video posted on GlennBeck.com, Beck accused Maddow of "selective editing" because while she aired his comment, "who has claimed that this snow storm is proof that global warming doesn’t exist?" she did not air his subsequent statement, "How many times have I said both for hurricanes and no hurricane, this doesn’t — one storm, one storm does not prove anything. It’s a trend."  Beck did not explain how this undermined Maddow’s point that he had previously suggested that the D.C. snowstorm disproves global warming:

MADDOW (video clip): Who’s claimed that? Dude, you have. [BECK CUT]  It is one thing to be totally outrageously wrong about facts and science.  But the price of that is getting made fun of for it and getting called out on it, boom, by Bill Nye, the Science Guy. On climate change, new rule – you lie, you must pay the Nye.

BECK: Ah, I see. I’m a liar, but – and here’s the inconvenient truth what was the very next sentence I said that they cut off?

BECK (video clip): Who has claimed that this snowstorm is proof that global warming doesn’t exist? How many times have I said both for hurricanes and no hurricane, this doesn’t – one storm, one storm does not prove anything? It is a trend.

BECK: Kind of nukes your whole point, doesn’t it?  I guess that’s why they didn’t show it. No wonder they sympathize so much with the alarmists who hide and lose key data. Looks like they don’t mind doing exactly the same thing themselves. 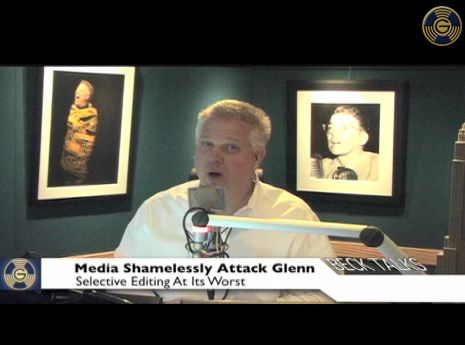 But Beck edited out Maddow’s evidence. As Maddow noted on her February 16 program, Beck accused her of "selective editing" — by editing out Maddow’s playing of Beck’s D.C. snow remarks from February 10. Indeed, in his video blog, Beck did not acknowledge his remarks about the D.C. snowstorm casting doubt on climate change science. From MSNBC.com’s transcript of Maddow’s February 16 program:

MADDOW: What was that little the flip clip in the middle there? What happened there? Was there something that you cut out? To accuse me of making it up when I said Glenn Beck is among those who have claimed snow disproves global warming, he just edited out the part where I gave the evidence of him doing that, the part where I showed him and a bunch of other people on Fox saying that snow disproved global warming.

Maddow notes Beck a repeat offender. Maddow added that Beck "is telling his viewers that I’m a liar and a propagandist for pointing out his cockamamie claim that snowfall disproves global warming.  He has in fact made that cockamamie claim a lot, no matter how much he denies it."  Maddow then played clips of Beck claiming on January 29 that "Al Gore is full of crap" due to Virginia’s snowstorm and promising to idle his SUV to prevent future storm; and Beck claiming of the Washington, D.C. winter snowstorm on February 10: "If we don’t find Al Gore by 5 o’clock, I’m starting an Amber Alert."

Previous articleJames O’Keefe and the Myth of the ACORN Pimp
Next articleSo Who’s Still Advertising On Beck? February 17 Edition …