Washington, D.C.–(ENEWSPF)– Following Obama’s widely praised address at the memorial for the victims of the Tucson shooting, the right-wing media have nonetheless strained to find ways to attack him. Their attacks have included the presence of T–shirts at the event — which were reportedly handed out by the university — the "pep-rally" atmosphere, and the timing of Obama’s speech, among other things.

RHEE: No, we can’t get into too much more detail than what we already have. But I can tell you right now with the type of surgery, her eyes, she can’t open her eyes at this point, mechanical standpoints, and she’s also on the ventilator, so she can’t speak at this time. [Gateway Pundit, 01/13/11; CNN, State of the Union With Candy Crowley, 01/09/11]

Hoft: "It’s A Pep Rally." In a January 12 Gateway Pundit post, Hoft wrote, "It’s a pep rally…The screaming in the stands by the kids was a little annoying though. They need to discuss this at the next SEIU meeting." Hoft added that despite this, he felt it was "the best speech Obama has ever given." [Gateway Pundit, 01/12/11]

Ace of Spades: "While I Have No Evidence [The T-Shirts Are] Obama’s Fault I’m Sure He Is Just The Same." In a January 12 Ace of Spades post, Ace posted a picture of a volunteer laying the "Together We Thrive" T-shirts on the back of chairs and wrote "This has nothing to do with photo-ops. All memorial services and funerals have their own slogans and t-shirts these days. Didn’t you know that?" Ace also claimed:

Unfair: Actually, I don’t have any evidence the t-shirts were put out by Obama’s people. I suspect they were, but it could have been Brewer’s people. It could also have been Giffords’ family or supporters.

For all I know Obama is just going along with this and might even have objected himself by saying, "T-shirts? Really?"

But while I have no evidence it’s Obama’s fault I’m sure he is just the same.

Malkin Complains About Speech’s "Timing" And "The Hooting, The Hollering, The Incredibly Inappropriate Tone." On the January 13 edition of Fox News’ Fox & Friends, Fox News contributor and blogger Michelle Malkin said the speech was at "the wrong time" and criticized the president for "waiting several days." She continued, "[Y]ou do have to question the timing of it, and as so many of my readers and viewers of that supposed memorial event reacted last night, the hooting, the hollering, the incredibly inappropriate tone and setting for something that should have been uniformly a somber occasion." Later in the interview, co-host Steve Doocy played video of Rep. Wasserman-Schultz (D-FL), who was in attendance at the rally and said, "It wasn’t a pep rally." Doocy said, "At our house … we were expecting something very somber … but it seemed like a political rally or a pep rally at some times." Malkin responded:

MALKIN: Yeah. The University of Arizona put on this event and it even had a branding and a slogan of "Together We Strive" —

MALKIN:  — and blue T-shirts that were handed out to everyone as souvenirs, and it had a circus-like atmosphere from the very opening, with the opening prayer that seemed to ramble from the Native American speaker, and then all of the hooting and hollering, as I mentioned. And with all due respect to Congressman Wasserman-Schultz, I don’t know what planet she was on because you could see it, you could hear it. [Fox News’ Fox & Friends, 01/13/11]

Malkin Calls Speech A "Bizarre Pep Rally," Complains About T-Shirts. In a January 12 post on MichelleMalkin.com, Malkin claimed she was "liveblogging the bizarre pep rally." Malkin’s updates frequently cited "whoops and hollers" from the crowd and later called the performance of "Simple Gifts" by the choir "a rare moment of solace in the program." Malkin also complained about the presence of T-shirts and slogans featuring the "Together We Thrive" logo, claiming, "Yes, the Tucson massacre is being branded" (emphasis in original). Malkin continued:

Attendees at the memorial tonight report that they are being handed out the blue and white t-shirts as they enter the venue.

A reader in attendance tells me via Twitter that volunteers will be wearing red-and-white shirts. He’s going to try and upload a photo.

Will there be giant foam fingers and blue cotton candy, too?

Isn’t the churning of the instant messaging machine a bit, well, unseemly?

Can’t the Democrat political stage managers give it a break just once? [Michelle Malkin,01/12/11]

Later, in an update, Malkin wrote:

As noted above, the University of Arizona announced the Together We Thrive event — and a few readers write in to say that the campus initiated the logo/campaign. Given U of A president Robert Shelton’s embarrassing, thinly-veiled partisan cheerleading for Obama tonight, it may indeed be a 100 percent-campus-initiated campaign. Given the Obama White House’s meticulous attention to stage prop details, however, I would say the odds of involvement by Axelrod/Plouffe & Co. are high. [Michelle Malkin, 01/12/11] 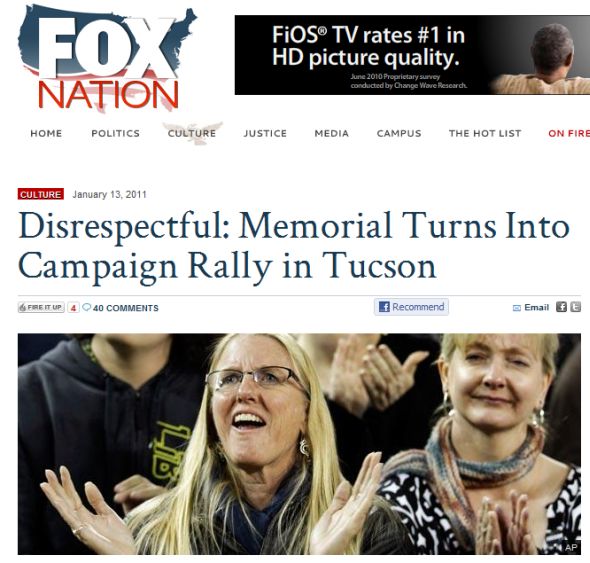 NewsBusters Attacks "Here We Place Our Hands Over Our Hearts" Line From Speech. In a January 12 NewsBusters post, blogger Mark Finkelstein wrote:

Concluding his remarks at the service in Tucson this evening for the victims of the recent shootings, Pres. Obama proclaimed: "here on this earth, we place our hands over our hearts."

Which made me wonder: since when, Pres. Obama? Weren’t you the man who ostentatiously declined, during the presidential campaign, to put your hand on your heart during the National Anthem while everyone else on the stage was doing so?

Will the MSM note the glaring discrepancy between Pres. Obama’s current words and recent deeds?

The post continued, "So Pres. Obama goes out of his way to talk of hand over heart.  And his two cabinet officers preceding him at the podium quote the Bible at length, with Eric Holder mentioning Jesus.  Some repositioning toward the traditional middle with 2012 in mind?" [NewsBusters, 01/12/11]