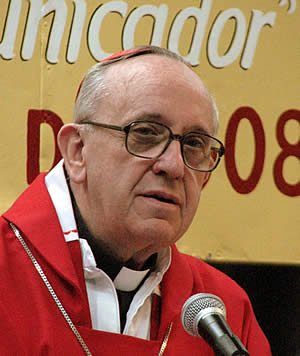 Updated at 11:49 a.m. to reflect that Pope Francis is not the first non-European pope ever, as the original commentary erroneously stated.

How will Pope Francis wear the Shoes of the Fisherman? Will the example of this pope, a friend of the poorest of the poor, help realign our priorities in America and beyond?

For Catholics, the election of a non-European pope, the first in centuries, must give us hope. His selection of his name caught our attention. Was he was honoring St. Francis of Assisi or St. Francis Xavier, S.J.?

Perhaps it really doesn’t matter. Perhaps the name itself demonstrates his desire to reform the Catholic Church. One of his first acts as pope was to bow his head in silence, asking for prayers.

Will this pope guide the Church in the direction of much-needed reform?

We know that this man lived a simple life, identifying with the poorest of the poor, as archbishop. The poor in the United States often find themselves demonized by the rich for, well, being poor.

Can we learn from the example Pope Francis set while archbishop? In 2001, Cardinal Jorge Bergoglio spoke of the contrast between “poor people who are persecuted for demanding work, and rich people who are applauded for fleeing from justice.” He 2009, Bergoglio declared that social debt is “immoral, unjust and illegitimate,” and extreme poverty is also a violation of human rights.

Will the new pope at least choose the wiser path and end the Vatican’s probe of America’s women religious? The Leadership Conference of Women Religious ( LCWR ) expressed hope Wednesday in a statement:

The Leadership Conference of Women Religious (LCWR) offers its congratulations and heartfelt prayer to Pope Francis I as he assumes the papacy at this critical time for the Catholic Church.

Cardinal Jorge Mario Bergoglio demonstrated great dedication to the mission of the Church during his leadership in Argentina. As he serves in the papacy, we trust that his many gifts will continue to be spent on behalf of the universal church, and most especially for people who live in poverty in all parts of the world.

As a conference of leaders of orders of Catholic sisters in the United States, we welcome Pope Francis I’s spiritual leadership and look forward to working with him in carrying forward the Gospel message.

Will the new pontiff take time to properly dialogue with these women who share his charism for ministering to the poorest of the poor?

There are other issues the pope must address: the Vatican Bank and the ongoing sexual scandals among Catholic clergy and hierarchy. Will this pope focus on principles, not personalities? Will this pope resist the urge to scapegoat our gay and lesbian brothers and sisters for the moral failures of others?

As Cardinal Archbishop of Buenos Aires, he was no friend to our gay and lesbian brothers and sisters. In the run-up to Argentina legalizing gay marriage in 2010, Cardinal Jorge Bergoglio declared, “This is no mere legislative bill. It is a move by the father of lies to confuse and deceive the children of God.” Argentine President Cristina Fernández responded that Cardinal’s statement was “really reminiscent of the times of the Inquisition.” Bergoglio further argued “if approved, this law would be a real and dire anthropological throwback.”

There are no reports of anyone crying for Argentina when the bill ultimately passed.

There was incredible national and international news coverage of the Catholic Church since the abdication of Pope Benedict XVI right through the first puffs of white smoke. How will Pope Francis seize the moment?

Tonight, a new man wears the white, slips into the Shoes of the Fisherman. At the very least, perhaps this pontiff will realize, unlike his immediate predecessor, that St. Peter did not wear Prada.

Below is audio of the pope’s first remarks to the city and to the world following his election: