During Thanksgiving, Talk to Your Family About the Trump Tax Scam – Here’s How

Senate Republicans are closer than ever to passing the Trump Tax Scam. It’s being sold as a “gift to the middle class”—but it actually raises taxes on 94 million American families, all to give its biggest tax cuts to the wealthy and corporations.

You know best how to tackle political conversations around the Thanksgiving dinner table (or whether to have them at all). Republicans will try to jam the Tax Scam through the Senate as soon as they get back to Washington. So if you’re up for talking to your family about it, or think you won’t be able to avoid it, here are some good points to mention.

(Is your family already with us? Great! Have them join our National Day of Action of November 27. Everything you need here.) 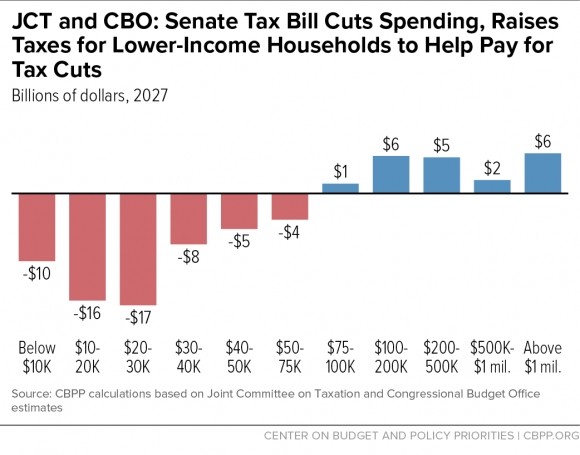 This chart uses data from the non-partisan Joint Committee on Taxation, which is the neutral referee on tax legislation the way the Congressional Budget Office is for other legislation. It shows us that the largest tax cuts go to the wealthiest taxpayers—and that the tax plan actually raises taxes on the middle class. Incomes below $100,000 essentially get nothing or face a tax increase by 2027.

It sounds hard to believe, right? Why would Republicans design a plan like that? It’s because they want to pass the Tax Scam through the Senate using a special process called reconciliation, which only requires 51 votes instead of the usual 60 to break a filibuster. Reconciliation comes with a set of rules you have to follow, and to meet those rules Republicans have chosen to let the tax cuts they say are good for the middle class expire. When they do, families will see their taxes go up.

If your crazy uncle tells you there’s no way Congress would let tax breaks for the middle class expire, remind him that funding for the Children’s Health Insurance Program—which insures nearly 9 million children from low-income families who otherwise would not have health insurance—expired on September 30, 2017 and Congress has done nothing to fix it. 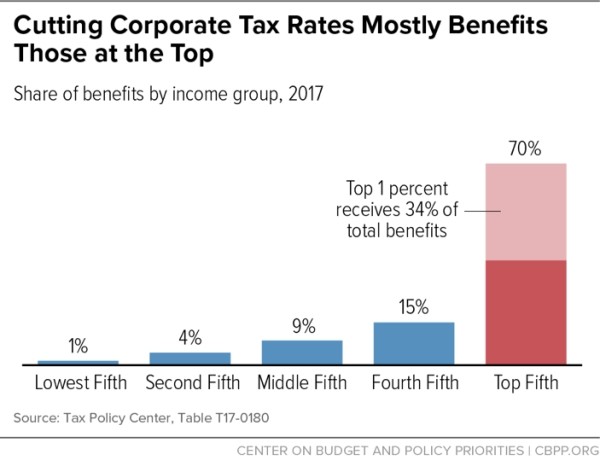 Republicans also say they’ve “expanded” the Child Tax Credit. They’ve doubled the size of the credit from $1,000 to $2,000—but they haven’t increased the refundable part of the credit. That’s key. The refundable part of the credit is what actually helps low-income families by allowing them to receive the benefit even if it exceeds the amount of tax that they owe, but since it isn’t increased, low-income families get nothing out of this change. This so-called tax cut gives 10 million families a token benefit of $75 or less.

Bear in mind that these meager tax cuts for the middle class—which are not as beneficial as Republicans say they are—are temporary. But the tax cuts Republicans give to corporations are permanent. At a time when corporate profits are at record highs, Republicans would slash the corporate tax rate from 35% to 20%. They tell us that will result in higher wages and more jobs, but we know shareholders receive a much larger benefit from reducing the corporate rate than workers. Moreover, corporations are already telling their shareholders they intend to buy back stock and pay down debt—shareholder-friendly activities—NOT hire more workers or raise wages. They aren’t even trying to pretend that these shareholder-friendly activities will “trickle down” to the middle class. Donald Trump’s economic advisor Gary Cohn recently asked a room full of CEOs how many of them intended to invest in their workers with their newfound tax windfall—and very few hands went up.

The Tax Scam adds $1.5 trillion to the deficit. 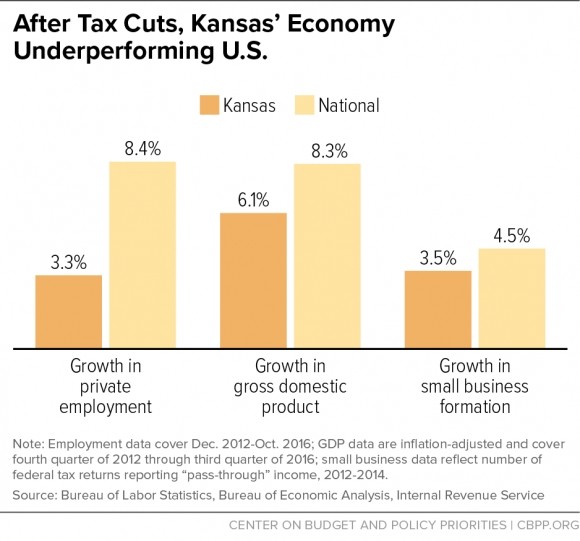 After years of decrying deficits as an existential threat to our country, Republicans are now changing their tune. They decided not to slash Medicaid, Medicare, and education in the same bill as their tax giveaways to corporations, so instead they’re letting their tax cuts for the rich add to the deficit. They say these tax cuts will magically pay for themselves by spurring new economic growth. But there’s no evidence to suggest that that’s true. In fact, when the non-partisan Tax Policy Center took into account new growth—a “dynamic” analysis that Republicans consistently say is missing from the debate—TPC found that the bill still adds $1.3 trillion to the deficit.

When Kansas experimented with a similar tax plan it crashed their state’s economy. Revenue plummeted—counter to the expectation that tax cuts would “pay for themselves and then some”—and the state was forced to close schools early to close the budget gap. The legislature eventually reversed the tax cuts, all while Kansas lagged behind the rest of the country.

Donald Trump and his family will be some of the biggest beneficiaries of the Tax Scam.

Trump has been claiming for months that he won’t benefit from the Tax Scam, but we know for a fact that isn’t true. Two of the biggest changes Republicans want to make—repealing the Alternative Minimum Tax (AMT) and repealing the estate tax—would give Trump, Ivanka, and Don Jr. billions of dollars in benefits.

The AMT is a parallel part of the tax code that was put in place to ensure that even the wealthiest individuals cannot exploit tax loopholes to get out of paying taxes altogether. Wealthy individuals must first calculate their tax obligation under the regular tax code, and then calculate it again under the AMT. If the AMT is greater, they must pay the difference. According to his 2005 tax return, Trump paid $38 million in taxes on $153 million in income; $31 million—or four-fifths—of his tax payment was due to the alternative minimum tax. Had it not been in place, his effective tax rate for that year would have been just 3.5 percent. That means that repealing the AMT opens a huge new loophole that wealthy people can use to avoid paying their fair share of taxes.

That change is compounded by the changes Republicans want to make to the estate tax. Only the wealthiest Americans have to pay taxes on their estate, since the threshold for when it is assessed is set at about $5.5 million per person ($11 million for a married couple). The Senate wants to permanently double this threshold to $11 million per person and $22 million for a couple—a change that would cost $83 billion, according to the Joint Committee on Taxation. This would mostly benefit a few extremely wealthy families.